Video game>> Protein ÔÇó The US 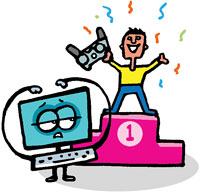 In a match that pitted video game players against a computer programme, the gamers outperformed the software in figuring out how 10 proteins fold into their three-dimensional configurations.

Proteins are essentially biological nano-machines that carry out myriad functions in the body. The biologists have long sought to understand how the long chains of amino acids that make up each protein fold into their specific configurations.

In May 2008, researchers at the University of Washington made a proteinfolding video game called Foldit, freely available via the Internet. The game, which was competitive and offered the puzzle-solving qualities of a game like Rubik's Cube, quickly attracted a dedicated following of thousands of players.

The success of the Foldit players, the researchers reported in Nature, shows that nonscientists can collaborate to develop new strategies and algorithms that are distinct from traditional software solutions to the challenge of protein folding.