It is a common sight that greets those visiting the villages in the semi-arid Mewat district of Haryana—streams of waste water emerging from doorsteps of homes, running through streets, and forming puddles here and there. Village Rawli is one such village. It has no sanitation facilities or sewers. Children play in these puddles while their parents watch them without any sign of concern. They are least aware of the threat this waste water poses.

Two villages situated near Rawli, however, present a somewhat different picture. When this correspondent visited the place, there was no wastewater flowing though the unpaved streets of Mundaka and Sakarpuri villages. The streets look clean. The residents inform they were able to clean up the environs by installing wastewater treatment systems in their homes with assistance of a Gurgaon-based non-profit, Institute of Research and Rural Development (IRRAD).

The residents have installed what are called soak pits that work on the simple principle of filtration. It consists of a circular pit of about one metre diameter and one metre depth. It is filled with filter materials which are easily available—pebbles, sand and brickbats. The wastewater from the kitchen and bathroom is directed into these soak pits through a pipeline. The soak pits were installed in the beginning of 2012 in March.

During interaction with the residents of Mundaka and Sakarpuri, the CSE team found that the residents are easily able to explain the principles on which these household-level wastewater treatment systems work. “The wastewater gets filtered and the clean water percolates into the ground to recharge the groundwater table” says Kiran Devi,  a resident of Mundaka village and a jal sanrakshan (water conservation) committee member. “After I constructed my soak pit, I also built a cow shed on top of it to use the space,” she adds. 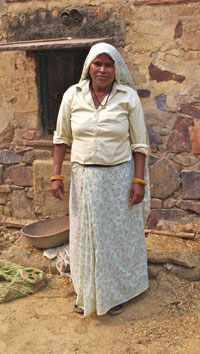 Lalit Mohan Sharma, group leader of natural resource management unit of IRRAD, says Mundaka and Sakarpuri villages were no different from Rawli a year ago. The streets were often waterlogged and abuzz with mosquitoes and flies. “One to three members used to be taken ill by Malaria every year,” he says. Now very few cases of Malaria are reported.

“In fact, the residents have noticed a 50 per cent drop in cases of diarrhoea and malaria,” says Khushi Mohammed, the field facilitator of IRRAD. There is no official data to confirm this claim because these villages are located in remote areas.

Making the residents understand the health hazards of stagnant wastewater in front of homes was a difficult task, considering the low level of awareness and education, admits Sharma. Convincing them about the benefits of installing soak pits was difficult for another reason. The residents are wary of outsiders, says Sharma.

IRRAD workers and the women residents acted as catalysts in the project to free the two villages of wastewater nuisance. "We organised meetings and explained how to install the systems. We also created Jal Sanrakshan committees consisting of women from these villages to involve people to make systems sustainable.

Every family built their own system by themselves and all the materials they needed could be gathered locally," says Mohammad Hakamuddin, another field facilitator of IRRAD.

The residents were also put in charge of cleaning the soak pits. This has to be done every 15 days. The cleaning operation is quite simple and takes a few minutes only; all that is needed is a trowel to remove the sludge. Even though the residents have no formal training, it could be observed that they are capable of handling these systems once things have been properly explained. 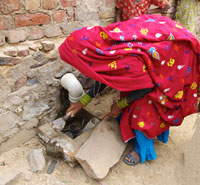 Each house owner constructed his or her soak pit and was made in charge of maintaining it. Sharma says the understanding and the knowledge the village residents gained during the project gave them confidence and helped them taken charge of the hygiene of their environs. Through survey and interaction with the project implementers, it could be estimated that of the total water consumption, 85 to 90 per cent comes out as wastewater. This is a large quantity and amounts to about 270 litres a day per household. This presents a good opportunity to recharge groundwater.

The projects have also increased the awareness among villagers, which was one of the aims of the project. Hopefully, the successful execution of the project in these two villages will help to spread the message to other nearby villages and eventually, help other villages in the region get rid of their wastewater safely.