Activists point out several drawbacks in the inclusion and deprivation criteria 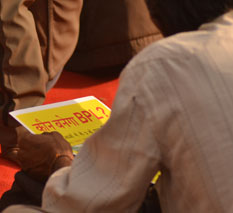 Many poor in the rural areas are at the risk of being excluded from the food security net if the results of the ongoing Socio Economic and Caste Census (SECC-2011) are implemented.

Take the example of Uddi Gujjar, a widow in her late 30’s. She lost her husband 10 years ago and lives with her two sons, Hanuman (16) and Prithviraj (15), in Tikel Purohitaan village of Jaipur district in Rajasthan. She has around 1.35 hectare of rain-fed farmland.

She has been a beneficiary of BPL all these years and gets 25 kg per month of cereals at Rs 2 kg from the ration shop. But now she could be dropped out from the BPL list under the SECC.

She says, “I live in a house made of mud, but it has a roof of cement and it is being considered as pukka. My 16-year-old son is being considered adult under the survey, but he is not allowed to take work under MGNREGA.” She questions the new criteria and asks the decision-makers to visit her house to assess whether she should be a beneficiary or not.

The Central government on June 30, 2011 started conducting SECC for the first time in the country. The exercise is being carried out by the respective state/Union territory governments with the financial and technical support of Centre. The exercise will end by December 31, 2011.

The Centre had stated that SECC is not a BPL Census. It is a nation-wide exercise undertaken to generate a rank listing of rural households, based on five automatic inclusion criteria and seven deprivation indicators and then the data will be given to the state governments, who in consultation and coordination with the Planning Commission can determine the BPL households in each of the states.

But Right to Food Campaign activist Kavita Srivastava says the criteria are mockery of poor. If a widow has a 16-year-old son, the kid would be considered as an adult according to SECC survey. However, MGNREGA does not provide employment to those below 18 years. Similarly, a kuccha house with a tarpaulin or three walls covered with a tin-roof would deprive a person from being categorised homeless, regardless of what conditions you are living in. Likewise, if a farmer has a kisan credit card of Rs 50,000 and above, he will not be considered as BPL.

She notes there are several drawbacks in the criteria and alleges that the Union rural development minister Jairam Ramesh and the Planning Commission have been insensitive to their demands when they approached them with the problems in the SECC survey. Despite glaring lacunae, the survey has begun in several states including Rajasthan and Odisha, while it is about to complete in Tripura, she says.

Kavita along with various Right to Food (RTF) campaign activists presented various case studies to bring out the glaring examples of failure of the new SECC survey. They allege that the survey would leave several million rightful claimants out of the new BPL list. RTF is an informal network of organisations and individuals fighting for the right to food in India. RTF activists have been carrying out a month-long “Roti-Bhaat Campaign” to highlight drawbacks of National Food Security Act and SECC that would end today. “The government is ready to bring National Food Security Act in the ongoing Parliament session and that too without knowing the criteria for selecting the beneficiaries,” says Srivastava.

She cited the example of Nani Devi, a 60-year-old who lives with her husband in a kuccha room house in Purohitaan village in Jaipur district. She has three sons, but all of them live separately and do not support them. The illiterate couple who belong to Scheduled Caste category has got a job card and is beneficiary under MGNREGA, but old age does not allow them to work much. They also have a kisan credit card with limit of Rs 50,000, but they have not taken any loan fearing the debt trap.

Nani says, “production from the land is not sufficient even for two square meals a day round the year. This year we had sown groundnut on entire piece of land and production was of around 28 quintals which fetched Rs 11,000. But the cultivation cost was around Rs 15,000.” In such a time of crisis, government ration was a big saviour. But now there would be no saviour for this old couple. SECC would lead to their names getting deleted from BPL list.
Web Specials Web Specials Web Specials Socio Economic and … Rural households Rural Development … Rural development … Right to Food (RTF) poverty line Planning Commission Planning Commission National Food … Mahatma Gandhi … Jairam Ramesh Below Poverty Line (BPL)
SUPPORT US