A number of solar mission projects operational only on paper 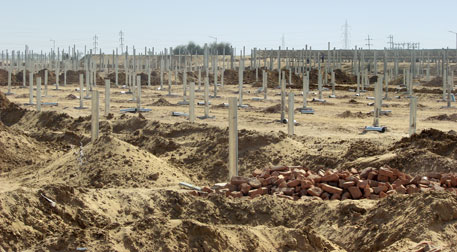 THE government has decided to act tough with 14 companies which did not commission their solar power projects in time. NTPC Vidyut Vyapar Nigam Limited (NVVN), the power trading arm of the state-owned National Thermal Power Corporation, penalised them by encashing a part of their bank guarantees. These erring firms are among the 28 that were awarded solar photovoltaic projects under batch one of first phase of Jawaharlal Nehru National Solar Mission (JNNSM). The date of commissioning of these plants was January 9.

Amrit Energy and Greentech Power are among the companies whose guarantees were encashed on February 16 to recover a total of Rs 30 crore (see table). But some project developers have managed to escape penalty by obtaining commissioning certificates from states without completing projects. 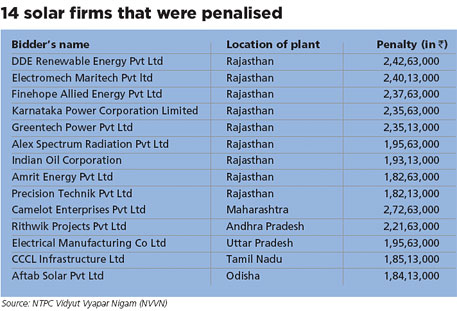 Lanco Infratech happens to be the engineering, procurement and construction (EPC) contractor for three of the companies that have been penalised—DDE Renewable Energy, Electromech Maritech and Finehope Allied Energy. A recent investigation by Delhi NGO Centre for Science and Environment had shown that Lanco Infratech is in possession of seven projects, including the above three (see ‘Solar scam’, Down To Earth, February 1-15). All these projects are located in Askandra village in Nachna Teshil of Jaisalmer, Rajasthan.

In keeping with JNSSM guidelines, the companies were asked to submit bank guarantees of Rs 9 to Rs 12 crore at the time of signing power purchase agreements on January 9, 2011. It was agreed that if a project developer misses deadline, NVVN would start encashing the bank guarantee in parts over three months, after which the project would be fined Rs 5 lakh per day for another three months. If still incomplete, the project would stand cancelled.

In the present case, NVVN encashed bank guarantees because the 14 companies did not commission the projects in the given time. But many more may have escaped NVVN’s notice.

Take the case of seven solar photovoltaic projects of 5MW each in Askandra village; Lanco is the EPC contractor for all of them. NVVN encashed the bank guarantee of three of them because they were commissioned a day after the deadline of January 9. The remaining four were commissioned between January 7 and 9, according to Rajasthan Renewable Energy Corporation (RREC). The Rajasthan Discoms Power Procurement Centre (RDPPC), the nodal agency for the state discoms, issues a commissioning certificate to a 5 MW plant “only when it is operational to feed the full 5 MW into the grid”, says its chief engineer N M Chauhan. Going by RREC and RDPPC claims, all the seven solar projects in Askandra have been commissioned to produce a total of 35 MW.

But a closer look reveals a different picture. When Down To Earth (DTE) visited Askandra on February 12, a month after the commissioning deadline, it found that less than half the works seemed complete. It was past the second penalty period, meaning NVVN should have encashed the next part of the bank guarantees. These seven project sites are located cheek by jowl in an area of 49.5 hectares. There were no sign boards to distinguish one site from the other. Solar panels were fully installed and connected only at two sites. In the remaining five sites, they were either being connected to inverters or the inverters were being connected to transformers. Two sites had only metal poles sticking out of the ground. A site engineer said, “a lot of work remains. We are only feeding 10-20 per cent of the commissioned capacity of 35 MW.”

Even the grid sub-station to which these seven projects are supposed to be connected is not complete. “Fifty per cent of the work remains,” said Dheeraj Singh, engineer at the sub-station.

Vijendra Panchal, Lanco’s site head at Askandra, said all the seven plants are operational and are feeding the 33 kv grid sub-station at Ajasar village, 8km away. A visit to Ajasar belied this claim. “No, they are not feeding our grid,” said B R Vishnoi, assistant engineer of the Ajasar grid sub-station. DTE found that Lanco is feeding the sub-station at Chandsar village, 3 km from Ajasar. The meter reading taken from the 33 kv Chandsar grid sub-station confirmed how little power these seven sites are generating. “Lanco’s seven plants in Askandra have fed only 65,385 kwh power in a month,” said Vishnoi who also looks after Chandsar sub-station. This is only 1.3 per cent of the promised output, and just enough for 210 households. If the plants were functioning at full capacity they can meet the needs of 15,800 households. What’s more, Lanco has taken 4,042 kwh from the grid station to power its site at night.

Then how is it that these seven plants obtained commissioning certificates? “Do not ask about commissioning. It is complicated. Besides, it is the job of RDPPC,” said Anil Patni, project manager with RREC. “Once the plant is commissioned, we do not bother to check if they are regularly feeding the grid. It is the company which will lose money because electricity will not be purchased from them,” said Patni. This attitude defeats the purpose of the ambitious solar mission. JNSSM aims to generate 20,000 MW by 2020.

There are around 20 projects under batch one of JNNSM in Rajasthan; 17 were commissioned by February 10. A visit to four more 5 MW commissioned solar plants in Phalodi tehsil in Jodhpur in Rajasthan and their readings noted from the Bap village grid sub-station showed they are transmitting sufficient power into the grid. For example, Mahindra Solar and Punj Lloyd were transmitting up to 30,000 and 23,000 kwh respectively a day.

So, while NVVN may have encashed bank guarantees of three of the seven projects in Askandra, the remaining four seem to have escaped because on paper they were commissioned before the deadline. “We encashed bank guarantees from the 14 firms because they were either not commissioned or were commissioned after the deadline. And for this data we depend on the state governments. We do not have mandate to go and check the sites,” says A K Maggu, general manager with NVVN. But it clearly is a matter of investigation, he adds.

According to Tarun Kapoor, joint secretary with the Ministry of New and Renewable Energy (MNRE), such things happen because the word commissioning seems to be interpreted differently by the Centre and states. According to NVVN, a project is considered commissioned when the full 5MW capacity is installed and is feeding the grid.

“The Rajasthan government has now written to us that many of their plants are partly commissioned,” says Kapoor. “For MNRE, these projects are not commissioned,” he adds. We are investigating the matter and if found guilty, bank guarantees will be encashed from them, he adds. “We will soon release a clarification defining the word commissioning,” adds Kapoor.