Electricity system reliability is going to be a major challenge

The International Energy Agency (IEA), an autonomous organisation based in France, predicts tripling of renewable energy capacity by 2040. In its recently published report, “World Energy Outlook-2014”, IEA says renewables would have a 33 per cent share in the energy generation mix, making it the world’s leading source of power.

Among various sources of renewable power, the major contribution would be coming from wind and solar power. Wind is likely to be the largest single renewable energy source by 2040, reaching 1,320GW, followed by solar PV, which is predicted to grow by 7.4 per cent annually to reach 930GW of cumulative capacity by 2040 (see graph below). 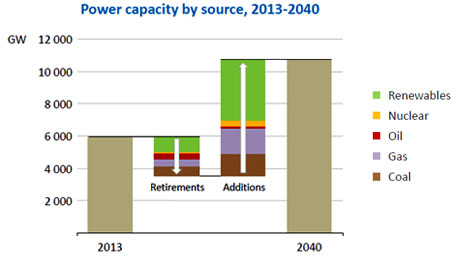 However, rapid expansion of wind and solar PV is going to raise fundamental questions about power market designs as investment in conventional power plants is going to be affected. China is set to see the largest increase in generation from renewables, more than the gains in the EU, US and Japan combined.

Global subsidies to renewables reached $121 billion in 2013, up by 15 per cent from the 2012 figure. This figure is likely to further increase to nearly $230 billion in 2030, according to IEA’s “New Policies Scenario”, before falling to $205 billion in 2040 due to the end of support commitments for recently deployed capacity. In 2013, almost 70 per cent of subsidies to renewables for power were provided in just five countries: Germany ($22 billion), the US ($15 billion), Italy ($14 billion), Spain ($8 billion) and China ($7 billion). The EU is projected to remain the largest financial supporter of renewables till 2040, though the US is projected to be a close second after 2035. Solar PV will continue to receive the largest portion of subsidies until falling unit costs help to reduce subsidies below those for bioenergy for power just before 2040. The value of solar PV in the system will also decline with more deployment, making competition tougher. Subsidies to onshore wind is set to  reach a peak just before 2020 and then decline steadily as it becomes competitive with conventional power plants in many locations. 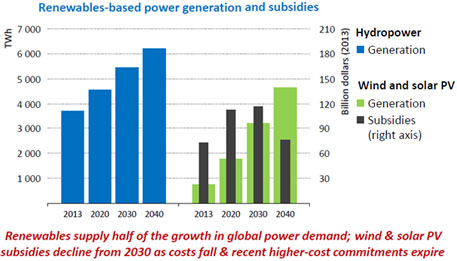 IEA’s Chief Economist Fatih Birol said that rapid expansion of PV and wind in the energy generation mix is good in terms of climate change perspective but electricity system reliability is going to be a major challenge.

He has been quoted as saying, “How we are going to manage the system in Europe with such a growth in renewables, most of them being an intermittent resource, is a big question, and I think in Europe there is a strong need for investment coming into thermal capacity for which appetite is almost zero today in order to have a reliable system.”