In the next leg of its journey, the plane is scheduled to stop in Varanasi in Uttar Pradesh 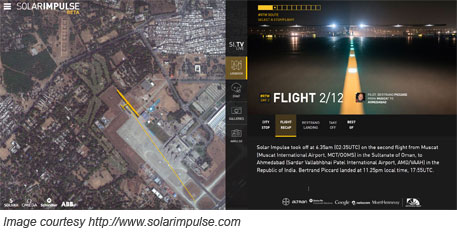 Fuel-free aircraft, Solar Impulse 2, kept its date with India. It landed at the Sardar Vallabhbahi Patel International Airport in Ahmedabad late in the night on Tuesday and will stay parked there for four days.

Chairperson and brain behind the project Bertrand Piccard flew the solar-driven plane from Muscat in Oman to India, crossing the Arabian Sea in the process.

According to news reports, it took Piccard just over 15 hours to complete the journey. In the second leg of its world tour, the plane covered a distance of 1,468 km, a new record, for a solar-driven plane.

In the next leg of its journey, the plane will visit Varanasi in Uttar Pradesh. It will leave for its new destination early on Sunday and will have a pit stop till Monday.

Solar Impulse has another 10 legs of journey to complete in the next five months where it will fly over the Pacific and Atlantic oceans, the BBC says.

Earlier, project partner and chief exceutive officer (CEO) Andre Borshberg had made the 12-hour inaugural trip from Abu Dhabi to Muscat on Monday.

When the plane arrived in Ahmedabad in darkness, light-emitting diodes (LEDs) illuminated its wings. The propellers were driven by energy stored in the batteries.
Mission planners said Solar Impulse will spread the message of clean technology among the people of Gujarat and India at large.

The Solar Impulse Project has already set several world records earlier. This includes a transit of the US in 2013.

As part of its world tour, Piccard is sharing the burden with his flying partner Borshberg. They have a daunting task ahead where they will only get catnaps of only up to 20 minutes. They will have to stay alert, particularly while crossing the Pacific and the Atlantic.