Soon, an early warning system for cyclones and floods

Regional Integrated Multi-Hazard Early Warning System (RIMES) for Africa and Asia was put in place soon after the 2004 tsunami hit the Indian shores, causing widespread damage along the coast of India and several southeast Asian countries. Headquarted in Bangkok, RIMES is a UN registered international organisation and intergovernmental body that provides tsunami warning to its member countries. It has been operational for the past three years. On June 21, ministers and other representatives from 13 member and collaborating countries met for the first time in India. Dinsa Sachan spoke to K J Ramesh, senior scientist and adviser to ministry of earth sciences and head of RIMES India, about the organisations future and India's role in the international effort. Edited excerpts: 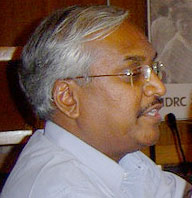 RIMES’ has existed for three years, but this was the first inter-ministerial meeting. Why?

RIMES’ was quickly integrated after the 2004 tsunami and the 2005 ASEAN meeting. It was being operated at a technical level until now. However, ministerial recognition is also important for an organisation because government is where funds come from. So keeping this in mind, the first ministerial meeting of this organisation was held. RIMES plays a unique role. Weather and oceanographic organisations like World Meteorological Organisation and Intergovernmental Oceanographic Commission (IOC) are mainly policy makers. But we need an entity that can provide real-time weather-related services. Sometimes, individual countries, which are vulnerable to the impact of natural calamities, are not capable of doing it on their own and need regional co-operation. That's where RIMES comes in.

What has been the main outcome of this meeting?

In this meeting, the focus has been on collaboration between member countries. Also, it was determined that collaboration with other weather and climate organisations has to be strengthened. We have decided to explore sustainable financial mechanisms. Our funding comes from organisations like United Nations Economic and Social Commission for Asia and the Pacific (UNESCAP) and Danish International Development Agency (DANIDA).

Which are the disasters RIMES provides insight into?

Currently, our focus is mainly on early warning for tsunami. We are trying to expand our ability to warn for cyclones as well. We are developing new models to make forecast for storm surges–powerful and gigantic waves that wash shores during cyclonic events.  RIMES is also gearing to upgrade flood forecast systems in Bangladesh, which has experienced some of the most disastrous storms in the past few decades. Based on data of rainfall between the past seven and 10 days, Bangladesh authorities would be able to make flood forecasts.

What's the role India is playing?

India is mainly playing a leadership role. We see RIMES as an exercise in technical leadership in terms of disaster management in the region. India was the first country in all of Asia to install a tsunami warning system after the 2004 tsunami. Even now, RIMES gets data from Indian National Centre for Ocean Information Services (INCOIS) in Hyderabad and distributes it to member countries. Moreover, Mozambique, which is situated on Africa's eastern coastline, has radars for cyclone detection, but they don't have people who can put them to use. So we are going to help them train people. We have also agreed to provide them with satellite images for keeping tabs on cyclones.  India will also share weather forecast data with Afghanistan, where infrastructure is in bad shape because of political instability.