A Russian attempt to light up the night by using sunlight reflected from a huge space-based mirror failed to come up to expectations but could some day provide an alternative to electric lighting. 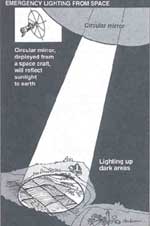 WHILE it was still dark on a recent February night, a swath of light streaked across Europe for a few moments, telling the world that brightness at midnight had become a reality.

For six minutes beginning 0522 GMT (1052 AM in India) on February 4, sunlight reflected by a space-based, circular mirror sped rapidly from Lyons in France to Brest in Belarus. Made of Kevlar -- a tough material also used in making bullet-proof vests -- and thinner than a human hair, the 20-metre mirror was unfurled from an unmanned Russian supply spacecraft alongside the Mir space station.

Russian scientists had claimed the mirror would be "as bright as several full moons" and would illuminate people in the streets "like actors on the stage". But in southern France, the mirror was visible only as a bright spot and its ground illumination was much less than ordinary moonlight.

The experiment, supported by the Russian space company, Energiya, was intended to show that mirrors deployed in space could save vast amounts of electricity by providing solar light to regions where winter night can last for months. The experiment also sought to show reflected sunlight could help in rescue operations after natural disasters like earthquakes and hurricanes that disrupt local power supply.

However, the experiment seems to have upset astronomers. Peter Andrews of UK's Royal Greenwich Observatory explained that light reflected by ordinary mirrors, howsoever faint, would interfere with observations through telescopes. Paul Murdin, who heads an International Astronomical Union panel on observatory protection, said safeguards would have to be taken to protect delicate instruments if the Russians expand their space mirror project.

However, observers predict there is little likelihood of Energiya continuing with the project because it is running out of money. Viktor Blagov, director of the Russian space flight control centre at Kaliningrad, said, "We need to collect money to continue the programme."

Clearly, the Russians have miles to go before their space mirrors can turn night into day.