The killer track has claimed lives of 52 elephants in the past decade; forest department and railways continue to blame each other 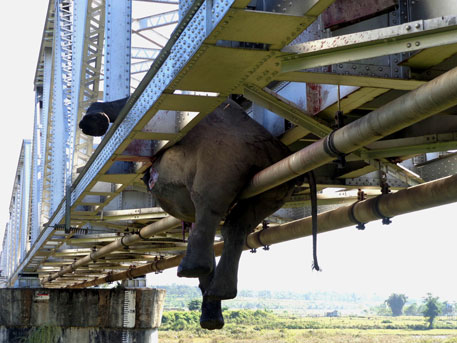 The Indian Rilways might have Bholu, the adorable jumbo holding a signal lamp, as its official mascot, but it cares little about its ilk. This was proved once again when a speeding Kavi Guru Express ran over a herd of elephants inside the Chalsa forest range in northern West Bengal. The accident happened early Wednesday evening when a herd of 40 to 50 elephants were crossing the track. Six elephants died while several others are seriously injured.

The 168 km railway track running between Siliguri and Alipurduar has claimed the lives of 52 elephants since 2004 when it was converted from metre gauge to broad gauge, increasing the frequency and speed of trains. The latest accident takes the death toll to 18 this year. In 2010 when seven elephants were mowed down, the railways decided to restrict the speed of trains. The fact that restrictions are not being followed was made clear when four jumbos were killed in May this year.

Railway officials have refused to take the blame. Speaking to Bengali news channel, 24Ghanta, the Union state minister of railways hailing from Bengal, Adhir Chowdhury, said, “I can guarantee the train was not speeding. It was running at less than 25 km/hr. The forest department should have alerted the railways of the presence of a large herd in the area.”

After the incident, railway services were halted for the night and resumed at about 9 am Friday morning. One elephant carcass was still hanging from the Jaldhaka bridge, stuck between the rails, photographer Atish Sen told this correspondent from the spot over the phone. “I have never seen such a ghastly incident. Elephants were literally chopped into pieces,” he said. 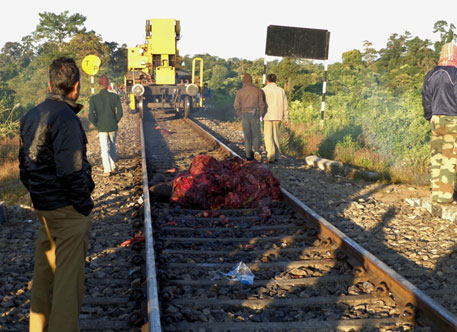 “There is a lack of clarity on the speed limit of trains inside the forest. More importantly, there is no monitoring system in place to check if trains are speeding,” said Heerak Nandi, wildlife activist from Kolkata who along with other environmentalists have filed a petition in the Kolkata High Court. “After seven elephants were killed in 2010, the forest department did not even lodge an FIR, and so no one has ever been brought to book,” he added.

Sumita Ghatak, divisional forest officer of Jalpaiguri, told Down To Earth that there is no specified speed limit prescribed for the stretch—only “cautious driving” is advised for stretches. She agreed over-speeding was the probable cause and informed that FIRs were lodged against train drivers for accidents this year.

Wildlife activists like Nandi have been demanding that the railways use the alternate track between New Jalpaiguri and New Alipurduar. It is a shorter route with track length of 143 km and can handle rail traffic after it is made double line, they contend. Another long-standing demand is to stop night traffic on the 168 km track till the alternate route is developed.

Compared to the deplorable track record of checking jumbo deaths in north Bengal, Rajaji National Park in Uttarakhand has successfully averted such accidents. The Train Hit Mitigation project in association with Wildlife Trust of India has used a mix of night patrolling, identifying vulnerable stretches and fixing speed limits. Between 1987 -2002, 18 elephants were killed on the 20 km stretch in Rajaji. For a decade after the mitigation project started, there were no casualties; in the past two years two elephants died on the track.