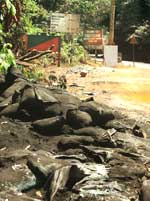 hazardous wastes from sponge iron plants in Goa, dumped in wildlife reserves of the Western Ghats, have put national parks in Goa and the reserve forests of Karnataka along the national highway 4, at risk.

The matter came to light, after Paryavarni, a Belgaum-based ngo in Karnataka, spotted over 700 sack loads of black sludge (wastes from sponge iron plants) dumped in the Mollem National Park of Goa, abutting Karnataka, in the last week of March. Fifty more sack loads of wastes were spotted in forests in Karnataka. Subsequently, Paryavarni found eight other sites in Goa and seven in Karnataka where the wastes, allegedly from sponge iron plants in Goa, were dumped. "There may be more such areas," says Shrihari Kugaji, secretary of Paryavarni.

The ngo sought the immediate intervention of the Karnataka government, which took up the issue with its Goa counterpart. Following investigations by the Goa State Pollution Control Board (gspcb) and the state forest department, gspcb held five sponge iron plants responsible on March 29. It issued notices under the Air (Prevention and Control of Pollution) Act, 1981, which states: "These plants are to remove the said waste within three days or face closure."

The notice has received flak from activists because it has only directed the plants to remove the wastes, instead of initiating judicial action against them. Incidentally, the wastes had not been removed till recently, when Kugaji revisited the sites. On April 4, residents of Londa in Belgaum staged a dharna in front of a new plant, Kundil Sponge Iron Limited, demanding its closure.

Goa deputy chief minister Wilfred D'Souza has, however, accepted that the state does not have any hazardous waste-treatment facility and is now in talks with the Maharashtra government to utilise its treatment facility at Taloja near Mumbai.

At least 203 industrial units in Goa generate about 9,972 tonnes of hazardous wastes every year.