Paryavaran Parirakshan Sangam, a non-profit organisation, had appealed to the appellate authority against the clearance on the ground that the power plant was being built on a wetland.

The Union Ministry of Environment and Forests responded to the deaths by withdrawing its clearance. The plant was to be constructed on a beela (water body) that is a 405 hectare (ha) wetland. Nineteen villages depend on it for irrigation and fishing. But according to documents submitted by the company to the ministry’s expert appraisal committee (EAC), there is no marshland in the area. The site, according to studies sponsored by the company, is barren and not near the sea. The studies include one by the National Institute of Oceanography in Goa and one by University of Hyderabad. 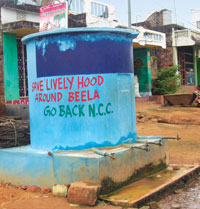 EAC sent a sub-committee to inspect the site after the studies were presented. The sub-committee concurred with the company that there was no marshland. Based on these reports, EAC granted clearance in December 2009.

Following the NGO’s appeal against the clearance, NEAA sent its member J C Kala to Sompeta in end-June. The visit revealed the area is a wetland of great ecological importance, NEAA noted in its order. It then recommended the minstry to survey the Srikakulam’s wetlands. The company has been directed not to start work on the power plant.