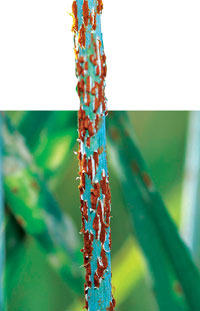 RECENT advancements in genetic engineering have offered hope of securing global food supply threatened by looming wheat epidemic. The threat is a virulent and rapidly mutating strain of a wheat fungus known as stem rust.

The fungus has plagued farmers since the beginning of recorded history and is believed to have contributed to the downfall of the Roman Empire. In the early 1950s, a global epidemic of stem rust threatened the livelihoods of a billion people.

In the latest breakthrough, scientists have identified two genes in diploid wheat (species with two sets of chromosomes) that provide immunity to Ug99, the most lethal strain of stem rust, according to two companion papers published online in Science on June 27.

Gene Sr33 was mapped by a team led by Sambasivam Periyannan of CSIRO Plant Industry in Canberra. It is carried by a wild wheat, Tausch’s goatgrass, and is found in eastern Europe and parts of Asia, including India. The other gene, Sr35, was identified by two teams of US scientists from Kansas State University and University of California, Davis. It was found in domesticated Einkorn wheat, the most primitive wheat species, known for its simple genomic composition.

Ug99, discovered in Uganda in 1999, has been known to devastate entire wheat fields in the country in a matter of days. Although Ug99 has only been found in wheat growing regions of Africa, Yemen and Iran, there is a very real and likely threat to Central and South Asia if wind patterns remain consistent, according to FAO. “Ug99 is always a threat,” warns Arun Kumar Joshi, senior wheat breeder at the South Asia unit of the International Maize and Wheat Improvement Center (CIMMYT) in Kathmandu. “This race is a super race. This means it broke 90 per cent of resistant varieties worldwide,” Joshi adds.

Approximately 90 per cent of all wheat varieties grown worldwide are susceptible to Ug99. This would mean economic turmoil and increased global hunger because wheat accounts for 20 per cent of the world’s caloric intake. “Since wheat is the main food crop of both developing and developed countries, it is important to save the crop,” says Periyannan.

Together, the two genes provide complete resistance to all known stem rust strains. Periyannan says Sr33 has been introduced in several bread wheat varieties developed at CIMMYT, University of Sydney and the US Department of Agriculture.

No room for complacency

Periyannan, however, cautions that the breakthrough could only provide temporary protection from stem rust. “There is always a race between the rust pathogen and wheat researchers. We did not expect Ug99 to have such high virulence and the ability to spread so rapidly. There is a possibility that a strain even more virulent than Ug99 could emerge in near future,” he warns.

Indeed, stem rust underwent a nearly 50-year remission phase after Nobel Peace Prize winner Norman Borlaug introduced rust-resistant wheat in the early 1950s, earning him the name, “The Man Who Fed the World”. Until the fearsome Ug99 was discovered 14 years ago, stem rust research was more or less put on the back burner. “There is no room for complacency and research has to continue, including surveillance, monitoring of races and breeding,” says Fazil Ducunceli, wheat rust specialist at FAO.

The next step towards the achievement of global rust immunity is to introduce Ug99 resistant genes into the global wheat supply. “An aggressive strategy to promote resistant varieties in farmers’ fields is the only viable option to fight stem rust,” says Joshi. “If cropping of susceptible varieties decreases in the primary risk area, this would reduce wind dispersal of spores from these areas to other regions and check the spread of Ug99,” he adds.