As the date for gram sabha meetings to decide the fate of mining in Niyamgiri hills nears, activists and Dongria Kondhs allege Odisha government conspiring to ensure no claim of religious rights is made over the proposed bauxite mining area 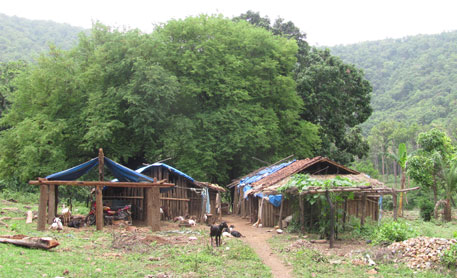 Three days before beginning of the scheduled series of the much-hyped gram sabha (village council) meetings in Odisha for taking a decision on bauxite mining in the Niyamgiri hill range, Niyamgiri Surakshya Samiti (NSS) and representatives of Dongria Kondh people on Monday alleged that government was trying to manipulate records to favour bauxite mining in Niyamgiri for metals and mining giant Vedanta.

Dongria Kondh people presented photographs that capture alleged attempts to settle outsiders in villages identified by government to hold gram sabha or palli sabha (as they are called locally) meetings and administration-prepared papers prioritizing issues to be discussed in the forthcoming meetings.

“While the Dongria Kondhs have been asserting that the abode of Niyam Raja, their deity, is spread all over the mountain range, the Rayagada district administration has drafted the document in such a way as if religious rights of people are confined to their respective villages only. The government is trying to ensure that no claim on religious rights is made in the proposed bauxite mining area,” alleged Bhalachandra Sadangi, who is associated with NSS.

NSS has been spearheading the people's movement against mining in the Niyamgiri hills for a decade.

Sadangi said government’s desperation can be gauged from the fact that it had identified a village where only one family resides as per voters’ list.

“In Ijurupa village under Trilochanpur panchayat in Kalahandi district, as per 2001 census, 18 families having total population of 80 were residing. There are 13 records of rights books. Of these, government land is recorded in four record registrar while rest nine registrars are of private landholders. Whereabouts of these land-holding tribals are not known,” he said. 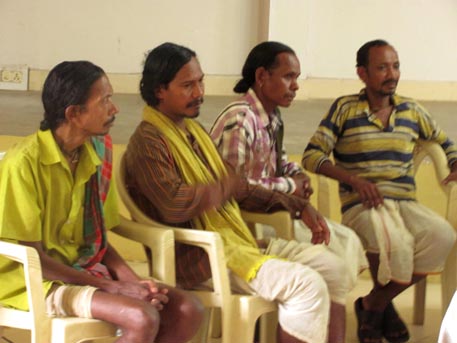 Sadangi alleged that the government was trying to construct eight to nine new dwelling houses in Ijurupa village in order to present them as houses of original inhabitants. Besides, how will it be possible to form Forest Rights Committee in a village where only one family resides as per latest voters list? he questioned.

Addressing the press conference, Prafulla Samantra, president of people's front Lok Shakti Abhiyan and one of the interveners in the ongoing Supreme Court case, said, “government has been repeatedly trying to subvert Supreme Court order which clearly says gram sabhas should not be influenced by project proponents.” (The Orissa Mining Corporation Ltd in joint venture with Sterlite Industries, the Indian arm of the London Stock Exchange-listed Vedanta, proposes to mine the Niyamgiri hills for bauxite to feed Vedanta’s alumina refinery in adjacent Lanjigarh).

“This is a blatant violation of the Apex Court order and is a clear case of subversion of the legal process for the benefit of Vedanta company. The notified gram sabhas are the only legal authorities to deliberate on the issues concerning the cultural and religious rights and prior interventions by the state government and local administrations adopting fraudulent means and manufacturing reports reveal a sinister design to influence the process of gram sabhas,” Samantra alleged.

Similarly, representatives of Dongria Kondhs warned the state government to desist from indulging in any conspiracy. “We consider whole Niyamgiri hill range to be the abode of Niyam Raja. Our voice and concerns should be contextualized properly,” said Indra Sikaka of Sherkapadi village in Rayagada district.

Sources said villagers were preparing to reject the government-backed gram sabha meetings and adopt a resolution to convene gram sabhas on their terms on separate date.

As per schedule, gram sabhas will be conducted in five villages of Kalahandi district between July 23 and 30 and seven villages of Rayagada district from July 18 to August 19. Union Ministry of Tribal Affairs and activists have registered strong dissent over the selection of villages. They are demanding conducting of gram sabhas in all villages inhabited by Dongria Kondhs and Kutia Kondhs.