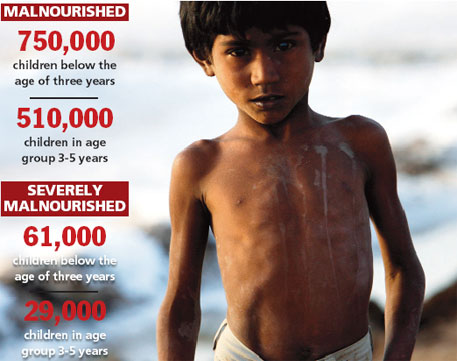 ACCORDING to the latest report by the Comptroller and Auditor General (CAG) of India, released on October 4, every third child in Gujarat in the zero to five year age group is underweight, with tribal children being the worst affected. The report says that in 2009-10, 0.73 per cent children were in the “red zone”, or worst affected, and the figure increased to 4.66 per cent in 2010-11. However, it fell to 2.28 per cent 2011-12.

The data is part of CAG’s audit of the Integrated Child Development Services (ICDS) for 2007-12. ICDS is government of India’s flagship programme since 1975, aimed at the development of children. The report says that among all categories of malnourished children, there were 22.32 million eligible beneficiaries under the Supplementary Nutrition Programme. But 6.34 million (or 28.39 per cent) could not avail the benefits. Similarly, as against the target of 300 nutrition days (number of days per year the government has to provide nutrition), a shortfall of up to 96 days was recorded. In tribal areas of the state, 44 per cent children were moderately malnourished, while 5 per cent were severely malnourished.

The report says that among the various reasons for this widespread malnutrition, the foremost is the shortage and poor management of anganwadis. Experts also say that low wages are a contributing factor. The Gujarat government partly accepts the blame saying it targeted the wrong age group. However, the ruling party of the state, Bharatiya Janata Party, also claims that malnutrition came down to 25.09 per cent by March 2013.

The main point of delivery of ICDS are anganwadi centres (AWCs). According to the Union government, one AWC is to be opened for a population of 400-800 for rural and urban projects and 300-800 for tribal projects. But against a requirement of 75,480 AWCs, only 52,137 (69 per cent) were sanctioned and 50,225 were in operation in Gujarat by March 2012. As a result, a population of 18.7 million was deprived of the benefits of ICDS, says the report.

The existing AWCs are in poor shape. Sanitation has emerged as the primary issue, with 40 per cent of the AWCs being without a toilet. About 33 per cent AWCs were found without safe drinking water, while nine per cent did not have a building. Many were found to be operating out of cattle sheds.

Of 3,333 AWCs proposed to be constructed by March 31, 2012, using a loan by the National Bank for Agriculture and Rural Development,Ã”Ã‡Ãª only 1,979 AWCs were constructed.

“The coverage of AWCs itself is very poor. Moreover, even in areas where AWCs do exist, there are a large number of migrant families and vulnerable groups like dalits and minoritiesÃ”Ã‡Ãªwho are not registered and hence don’t get counted,” says Jahnavi Andharia, chief coordinator of Anandi, a non-profit working among the marginalised in Gujarat. In a survey conductedÃ”Ã‡Ãªthis year, covering 13 villages in Panchmahals and Dahod districts, Anandi found that 55 per cent children were underweight and 23 per cent severely underweight.

“The reasons are aplenty, but low wages and poorly managed mid-day meal scheme are at the heart of it,” said Indira Hirway, director and professor of economics at the Center for Development Alternatives, Ahmedabad. She said the state ranks 14th and ninth in men’s and women’s wage rates, respectively, among the major 20 states.

Report of the Comptroller and Audit General of India on public sector undertakings: Government of Gujarat