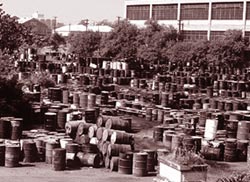 two years after 114 countries decided to minimise the adverse effects of chemicals on human health and environment by 2020, much work still remains to be done to achieve the goal. While government delegates and representatives of international institutions and non-governmental organisations (ngo) made some progress in discussions at the Second Session of the Preparatory Committee for the Development of a Strategic Approach To International Chemicals Management, held at Nairobi, Kenya, from October 4-8, 2004, most decisions were left for future meetings.

Though the meet inched further towards developing an overarching policy strategy, it was way behind the stage of determining the steps to implement it or the process of monitoring the implementation. These issues will be taken up at the next preparatory meeting in 2005.

The fundamental question to be addressed at the Nairobi meet was: how to reduce the risk from commonly used chemicals? Participants discussed issues ranging from management of chemicals through their life cycle to new challenges posed by heavy metals and endocrine disrupting chemicals like pesticides. Norway and the eu specifically called for eliminating the risk of endocrine disruptors. The International Persistent Organic Pollutants Elimination Network, a group of ngos, also suggested phasing them out. But Japan and the us opposed the creation of any list of specific chemicals at this stage of negotiations.

Illegal trafficking of hazardous chemicals was introduced into the list of objectives on the insistence of Latin American and Caribbean nations. While international ngo Greenpeace wanted a trade ban on some hazardous wastes, Egypt proposed to merely regulate exports of hazardous substances. Many developing countries, including India, benefit from the waste recycling. But the movement of hazardous wastes, mainly from developed to developing nations, causes several problems for the latter.