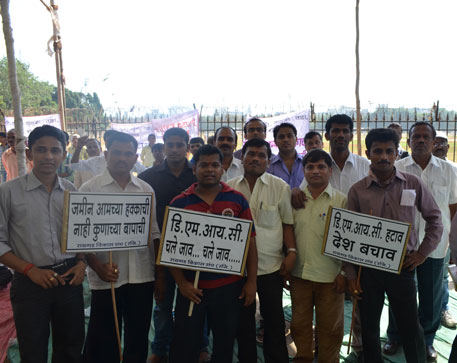 The Land Acquisition (Rehabilitation and Resettlement) Bill, 2011, which is close to being passed by Parliament after political parties arrived at a consensus on it last month, has found supporters among those fighting forceful displacement and land acquisition for industrial projects in Maharashtra. On the occasion of Maharashtra day on May 1, the Farmers’ Anti-corridor Struggle Action Committee, an outfit of peasants from 78 villages of Raigad district, submitted a memorandum to Chief Minister Prithviraj Chavan, demanding complete halt to ongoing land acquisition for the ambitious Delhi-Mumbai Industrial Corridor (DMIC) project till the new law comes into force.

“The state government must immediately halt the current acquisition process and follow the Central government guidelines against forceful acquisition. The Bill concerning land acquisition and rehabilitation is still being discussed by Parliament; then why the hurry in acquiring land from farmers? Or is it a deliberate ploy to not let the provisions of the new Act be applicable to the ongoing acquisitions? ” the committee demanded to know in the memorandum.

DMIC, a US $90 billion mega-infrastructure project, is to be implemented with financial and technical aid from the government of Japan. The DMIC region comprises parts of seven states (Uttar Pradesh, Delhi, Haryana, Rajasthan, Madhya Pradesh, Gujarat and Maharashtra) and two Union Territories (Dadra & Nagar Haveli and Daman & Diu) and is planned along the1,483-km-long western Dedicated Railway Freight Corridor. In Raigad alone, at least 67,500 acres (27, 316 hectares) in 78 villages are set to be acquired for the project by the Maharashtra Industrial Development Corporation (MIDC). Forty-two of these 78 villages have already been served land acquisition notices.

After an open meeting of hundreds of farmers from Raigad district at the historic Azad Maidan, senior member of the farmers’ committee, Ulka Mahajan, detailed the reasons for their opposition. “The state government is making use of the controversial Maharashtra Industrial Development Act, 1961, hastily for DMIC land acquisition to avoid applying provisions of the new land acquisition and rehabilitation Act. There is more space for resisting forceful land acquisition in the new law. While consent of 70 per cent land owners is required in public-private-partnership projects, in private projects consent of 80 per cent land owners is obligatory,” explained Mahajan.

Since April 10, the farmers’ action committee has been protesting outside the office of the sub-divisional officer in Mangaon against land acquisition which began in mid-2012. “The protests will go on till May 6 as 42 of the 78 villages that have been served land acquisition notices will have finished their individual daily protests at the Mangaon office. Veteran peasants’ leader N D Patil will then take up the issue with the chief minister,” said Mahajan.

Despite repeated attempts, officials from the industries department remained unavailable for comment.

After 19 months of hectic negotiations between the government and opposition parties, the land bill is expected to be passed by the Parliament soon. On April 18, the government claimed that all major political parties have reached a “broad consensus” on the bill. The industry was quick to express apprehensions about it. “This bill, as per our understanding, will further prolong the process of land acquisition for industry. It would take three to five years on an average to acquire land. Moreover, we understand that the bill still provides for consent from 80 per cent of the affected families which will delay the process and also act as a deterrent for the industry,” said A Didar Singh, secretary general, Federation of Indian Chambers for Commerce and Industry, in an official statement on the same day.