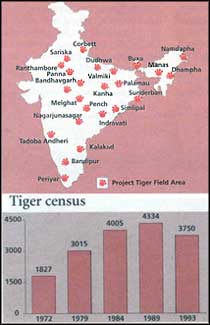 ALARMED by the increased rate of tiger poaching in 23 tiger reserves through-out India, a proposal to create a Special Strike Source for tackling the menace by the Project Tiger Steering committee, headed by the Union minister for environment and forests, Kamal Nath, has finally been green signalled by the Planning Commission.

Says Arin Ghosh, director, Project Tiger, "To match the organised gang of poachers, we have to create this special force, who will be exclusively trained to tackle poaching."

The project cost has been estimated at Rs 2.5 crore. For the first 5 years, the Centre will fund the project and then states would share 50 per cent of the expenditure.

Although project officials are very optimistic, there is a degree of scepticism about the project's success. Said Brigadier Ranjit Talwar, director, Trade Record of Flora and Fauna in Commerce of the World Wide Fund for Nature- India, "You can not have a common yardstick for all the reserves. Until a detailed study is done of all the reserves, how can a standard plan be formulated?"

He opined that an operation on a war footing is necessary to defend the boundaries of the tiger reserves.

Valmik Thapar, head, Ranthambhor Foundation, and member, Project Tiger Steering Committee, said the project has been on the anvil for over a year, but was delayed by the ministry of finance's reservations on sanctioning money.

He further said, "After recommending the creation of the strike force, a survey was carried out in January this year, and it was found that 74 per cent of the reserves did not have strike forces and neither do they have the infrastructure to have one."

Madhya Pradesh, which has been awarded the status of 'tiger state', has created a special 'Tiger Cell' in the police department to tackle poaching in the state. In the past 7 months, the cell has confiscated 10 tiger skins and 13 leopard skins.