India still without a plan to investigate the 2004 tsunami 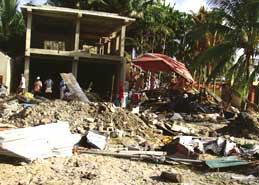 more than a year after the killer tsunami hit southern India, the country still does not have a plan in place to study the seafloor rupture that triggered the calamity.

Not only has India not initiated any research programme to probe the 1,300-kilometre rupture zone, two-thirds of which falls in its territorial waters, but it has cold-shouldered even the proposals by scientific teams from other countries. A comprehensive study of the affected subduction zone (where tectonic plates collide) is vital to model the earthquake as well as gauge the likelihood of more tsunamis in the area.

Opinion is divided on why India hasn't taken up the study on the region. "We have a scarcity of talent for undertaking such studies," says V S Ramamurthy, secretary, department of science and technology. But others feel humanpower is not an issue. "We do have scientists who are capable of delivering, if a programme is launched," says Harsh Gupta of the Hyderabad-based National Geophysical Research Institute. Gupta, who till recently was the secretary in the department of ocean development, however, feels that there is no urgency in studying the rupture zone, as "it is going to stay".

C P Rajendran of Thiruvanantha puram-based Centre for Earth Science Studies, agrees with Gupta on the issue of India's capability. "Institutions such as National Institute of Oceanography (in Goa) can do a good job of it," he says. As for resources, "Money has never been a problem for a good research project in India," he adds. More than the government, the Indian scientific community should take the blame for not initiating the study, he feels.

But even the Indian government has refused to open the doors to geologists from other countries, unlike other tsunami-affected nations such as Indonesia. Several research missions to probe the rupture zone are planned by advanced countries this year. The first such contingent set sail from Germany on January 20. The scientists will run studies such as seismic surveys and sediment sampling during a six-week mission organised by the Federal Institute for Geosciences and Natural Resources in Hanover. Research teams from the uk and the us are to follow. But these ships will not have permission to enter the Indian waters. Several research groups did try to get permission immediately after the tsunami, but failed to get a nod from the Indian government. The Union ministry of defence does not allow any foreign research vessels in the Indian waters for reasons of "national security and sovereignty."

There is no harm if India takes such a stand. But, then it should launch a programme of its own, says a scientist with a state-run research institute, on condition of anonymity. Researchers in other countries, too, have a legitimate right to get accurate and reliable data on such geological events, he feels.

Chris Goldfinger, a marine geologist at the Oregon State University, usa, has been trying to collaborate with Indian scientists. According to him, there wasn't an outright "no" from Indian authorities. But each time he approached Indian research groups (for collaboration), there wasn't any positive response. "At the level of scientific colleagues, we were told that this idea would never be allowed," Goldfinger says. "I've been told by virtually everyone who has worked in India, that the attitude is that India can take care of herself, and does not need help. While I can understand the pride involved, and India indeed has many good scientists, it does not have any experts in subduction zone earthquakes, tsunami, and the like, and clearly this is needed."