With a sharp fall in India's tiger population, the ministry of environment and forests has decided to set up special teams to deal with poaching. 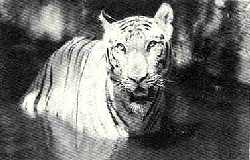 THE MINISTRY of environment and forests (MEF) has decided to launch a target-based action plan to stop the dwindling tiger population in the country. Measures proposed include hiking fores staff salaries by Rs 100-400, creating new tiger reserves, setting up special anti-poaching teams and forming a Global Tiger Forum.

The decisions were taken at a meeting on January 6 of the MEF apex steering committee on tigers, which considered the preliminary results of the 1993 national tiger census.

The census figures available indicate a sudstanial decline from the 4,334 tiger counted in the 1989 and in Maharashtra, the tiger population has fallen from 417 to 276.

The 1993 cens7us used advanced technological methods and was open to voluntary agencies. It is believed to be more accurate than previous censuses. A worried Kamal Nath, minister of state for environment and forests, admitted at a press conference that census reports received from 19 state and Union Territories were "a cause for serious consern since several hundred tigers are missing".

Nath announced the formation of a "crisi cell" under his chairpersonship to function as a sub-committee of the MEF steering committee. He also promised the formation of an intelligence cell to gather information on poaching and smuggling and a "strike force" to be deputed to crisis-ridden areas.

Wildlife officals are not very forthcoming when asked to explain why poacing is on the increase. A big factor in increased poaching seems to be the active participation of villagers living around tiger reserves, who are hostile to conservation schemes that deny them access to the forest.

The solutions being hurriedly offered by the MEF seem to indicate this factor has again escaped the government's notice.