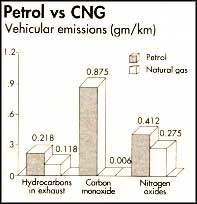 FOUR buses of the Chola Roadways Corporation at Nagapattinam in the coastal district of Thanjavur are different from the rest of the fleet. They are fueled by a half-and-half mix of compressed natural gas (CNG) and diesel. The pilot project is the first of its kind in the country.

India is plentifully endowed with natural gas. In fact, over 15 million tonnes of it is flared annually from oil wells. Technology for the use of CNG is well established and, world-wide, some 700,000 vehicles run on CNG.

According to officials of the Gas Authority of India Ltd (GAIL), "The long term plan is to take up the conversion programme for fleets in cities along the Hazira-Bijapur-Jagdishpur (HBJ) gas pipeline connecting the western and northern regions. These cities can be covered without heavy investment in pipelines."

The ministry of petroleum and natural gas had assigned the Bombay-based Inchra Gandhi Institute for Development Research (IGIDR) to conduct a techno-economic assessment for the introduction of CNG in the transport sector.

Based on this assessment, GAIL and the Indo-Burma Petroleum Company Limited (IBP) have been trying to popularise the use of CNG in petrol-driven vehicles in the cities of Bombay, Baroda and New Delhi.

A conversion kit is needed to make the switch between CNG and petrol, allowing for 80 per cent to 100 per cent petrol substitution. In diesel-driven vehicles with compression ignition engines, largely buses and trucks, the possible substitution ranges from 35 per cent to 90 per cent, depending on engine design and operating conditions. "So far what has hindered the introduction of CNG in transport vehicles has been the absence of a clear-cut government policy, even while large quantities of natural gas continue to be flared," comments Jyoti Parikh of the IGIDR.

A senior GAIL official says, "The present policy of pricing diesel far below its cost of production has been a constraint. CNG compares with petrol in the cost of production, whereas in comparison with the subsidised price of diesel, it is unattractive to the consumer."

Vehicle manufacturers like Maruti Udyog Limited are holding out. They insist that they would like to carry out their own trials using the conversion kits, before they could offer it as an option for car buyers.

Trials similar to those in Thanjavur are soon expected in the coastal districts of Andhra Pradesh, near the gas-rich Krishna-Godavari basin. A similar project has targeted five DTC buses to be converted in 1992. But the DTC is,lukewarm about the change. A senior official said, "We are complying with the government directive to participate in the CNG programme. We do not know what the outcome will be or what the savings are expected to be."

The speed with which the CNG programme progresses will depend on how fast the infrastructure of gas pipelines, feeders from the main line, fuelling stations, and, of course, manufacture of CNG kits come up.