Ghoti, a village in the severely drought-hit Solapur district of Maharashtra, is facing acute drinking water crisis. It also has the dubious distinction of having 6,000 borewells for its 3,000- odd residents and about 40 hectare (ha) of standing sugarcane crop. Till about 15 years ago, the village had no water worries.

Things changed after two sugar factories were set up in neighbouring Karmala and Barshi tehsils. Farmers started growing sugarcane in large tracts of land. Water that came from the Ujni dam was enough for irrigation. But when monsoons failed in 2011 and 2012, they started drilling borewells in a desperate bid to save their crops.

Six per cent of Maharashtra’s cultivated area is occupied by the water-guzzling sugarcane. One ha of sugarcane ensures that at least four ha of other crops are deprived of water. “Its water footprint is alarming,” says D M More, former director general of the state government’s water resource department. “At present, sugarcane alone consumes water equivalent to the total storage capacity of all dams in Maharashtra,” he says. More now runs the non-profit Maharashtra Sinchan Sahayog and has done a two-year study on the impact of sugarcane crop in the state.

Excessive digging of borewells is drying up aquifers. Villages that have standing sugarcane crops are buying drinking water from private tankers, he says. “There is a growing feeling among people that they are being deprived of their rightful share of drinking water even as others’ crops flourish,” says Madhav Chitale, head of the Maharashtra Water and Irrigation Commission, 1999.

The commission recommends a cap on new sugar factories in water-deficit river basins, and shifting of sugar factories out of drought-prone areas. The 1999 Godbole committee, constituted to investigate sick sugar cooperatives, had made a similar recommendation. D K Pal, former head of Division of Soil Studies, National Bureau of Soil Survey and Land Use Planning, Nagpur, says his institution has repeatedly recommended a return to traditional rain-fed crops of the region such as legumes and oilseeds. Canal irrigation, which is used to extend sugarcane acreage, is detrimental to arid soil, he says. “In some districts such as Dhule and Ahmednagar, salinity caused by cane cultivation has rendered huge patches of land unfit for cultivation.”

But the government has ignored all such recommendations. The reason for this conspiracy of silence is the political clout sugar cooperatives wield. Almost all sugar factories in the state are controlled by powerful politicians. Thirteen of the 30 ministers in the state cabinet are either sugar factory owners or heads of sugar cooperatives. Policy measures are, therefore, dictated by the sugar lobby. 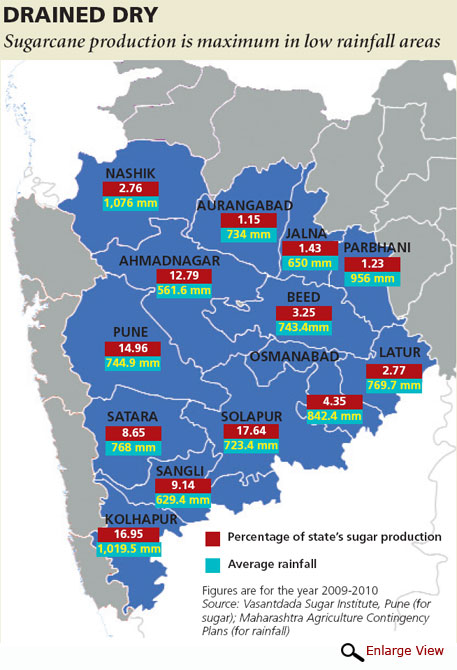