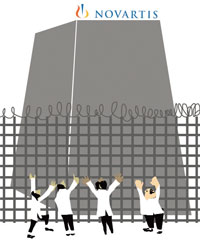 Sun Pharmaceutical Industries Ltd has signed an agreement with Novartis Pharmaceuticals Corporation to settle the lawsuit filed by the latter in the US over cancer drug Glivec. Sun Pharma may launch a generic version of Glivec in the US market in 2016, giving Novartis extra months without competition for Glivec.

In a statement issued on Thursday, Sun Pharma, an Indian generic company, announced that one of its subsidiaries has executed a settlement agreement with Novartis,  stipulating a dismissal of the lawsuits filed in the US regarding submission of an Abbreviated New Drug Application (ANDA) for a generic version of Glivec, imatinib mesylate tablets.

These tablets are indicated for treatment of chronic myeloid leukemia.

“Under the terms of the settlement agreement, Sun Pharma’s subsidiary may launch its version of generic Gleevec in the United States on February 1, 2016. The other terms of the agreement are confidential,” says the company.

Founder chairperson of Cancer Patients Aid Association (CPAI), a Mumbai non-proft, Y K Sapru, said it is a very good development and will make the drug affordable to scores of patients.

Sun Pharma’s subsidiary holds a tentative approval from the US Federal Drugs Administration for its ANDA for a generic version of Glivec which is the registered trademark of Novartis. Glivec had annual sales of approximately US $ 2 billion in the US.

Order: Order of the High Court of Delhi regarding launching, introducing, selling, marketing and/or distributing the defendants’ (Roche Products (India) Pvt. Ltd.) drugs, i.e. CANMAb and HERTRAZ or any other biosimilar version of Trastuzumab in India