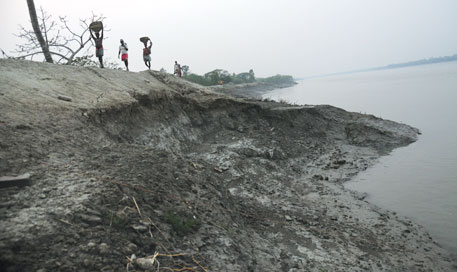 For decades, authorities have been trying to protect the Sundarbans, that spans India and Bangladesh, by setting up engineered embankments all along the delta. But that have not helped. Instead, the fragile region has become more vulnerable to weather extremes and tidal fluctuations.

Conservationists have expressed concerns over the deteriorating condition of the Sundarbans at a three-day international workshop on risk management and adaptation to climate change in deltaic regions, which began on January 29 in Kolkata.

Highlighting the current vulnerability of the Sunderbans, Subhas Acharya of the Sunderbans Development Board said that the Sunderbans has over a 1,000 kilometre of embankments, which are vulnerable to climate change. A large part of this was destroyed during the cyclone Aila. Apart from the extreme weather events, tidal fluctuations are increasing year-by-year causing as much damage as the Aila. For instance, in 2012 embankments around four to five districts of the delta were severely damaged by saltwater ingress. Saltwater ingress has also contaminated drinking water tanks, creating severe water shortage in the delta, he said.

Speaking about the land and water contamination, Kalyan Rudra, chairperson of the West Bengal Pollution Control Board, said that the sweet water was reducing in the deltas. One the one hand, people are indiscriminately pumping groundwater for irrigation. On the other hand, Greater Kolkata dumps all its wastewater on the Sundarbans, added Rudra.

Speakers at the event also discussed about the gradual changes in land-use patterns over the years in the Sunderbans with forests being cleared for paddy cultivation, some of this land getting transformed to ponds for captive fisheries.

Conservation experts at the conference expressed concern that further changes are continuing with severe long-term consequences. For instance, with saline water ingression, some of the fisheries in the Sundarbans are closing down and getting converted to brick kilns. This is further destroying the region’s fragile ecosystem.

Other concerns highlighted at the event included the return of vector borne diseases such as kala azar and increased migration of men, leaving women and children behind.

Expanding agricultural land at the cost of deforestation, expanding settlements along the river banks and setting up engineered embankments all along the delta have not helped. In response to the rising vulnerabilities, experts repeatedly called for a new development paradigm that is “eco-centric” and sensitive to the local biodiversity.

Other measures such as shifting some of the most vulnerable communities to stable parts of the Sundarbans, diversification of livelihoods, leaving adequate buffer zones for rivers to deposit sediments, and plantation of species of trees more suited to the higher salinity, were also discussed.

Scientists and experts from the India Metrological Department and the state department for disaster management spoke about the early warning systems to warn people about impending disasters and also effective communication systems for the same.

Speakers from other vulnerable countries, such as Bangladesh and the Philippines, also shared their experiences and perspectives on disaster mitigation measures being adopted in their countries.  Representatives from Bangladesh and India called for a cross-border joint platform to respond to the challenges of the Sundarbans, as efforts taken on one side to reduce vulnerabilities would be ineffective without similar efforts across the border.

The event is being organised by Department of Disaster Management, the West Bengal government, WWF-India, Environment Governed Integrated Organisation (EnGIO), a non-profit in West Bengal, and the World Bank.