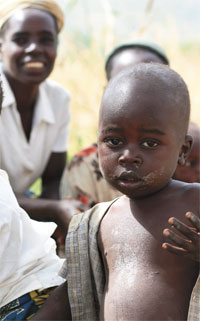 The Supreme Court has ordered that no tourism and commercial activities should be allowed near the habitat of the Jarawas, the ancient aboriginal tribe of Andaman and Nicobar Islands. The court order, dated July 2, is meant to ensure that no person other than the member of the aboriginal tribe will be allowed to enter the Jarawa tribal reserve and the five-kilometre buffer area around it.

The Jarawas are extremely endangered, only 300 members of the tribe are left. They are believed to have little immunity to outside illnesses and increasing contact with people outside their community puts them at risk of diseases that are new to them.

The court’s order refers to the Andaman administration’s 2007 notification, creating a five-km buffer zone around the Jarawa reserve. The notification banned any person other than a member of an aboriginal tribe from entering the buffer zone for any commercial or tourism activities. The notification was, however, quashed by the Calcutta High Court on the application of a tourist resort. The administration later challenged this order in the Supreme Court.

Trunk road would be off limits now

While the apex court was hearing the case, tourism continued unabated in this inviolate area with many holiday resorts and shops operating. The Andaman Trunk Road, which passes through the Jarawa reserve, continues to be open for traffic despite a Supreme Court order prohibiting it in 2002. Recently, a video showing Jarawa women dancing in front of tourists raised questions over allowing tourism in the region.

Coming out strongly in favour of the 2007 notification of the Andaman administration, the court said: “It shall be the duty of the principal secretary (tribal welfare) and other officers of the administration of Andaman and Nicobar to ensure total compliance of the prohibition contained in notification dated 30.10.2007 and this order. Any breach of this order will entail punishment under the Contempt of Courts Act, 1971.”

Interestingly, the Andaman administration wanted a few exemptions from the prohibitions contained in its 2007 notification. It pleaded the government be allowed to run guest houses, small commercial units employing less than 20 people and having turnover less than Rs 1 crore and allow tourist visits to a few places in the buffer zone during the day. The court, however, did not entertain the plea.

“Therefore, till the notification is rescinded or amended, no commercial or tourism related activity can be allowed within the reserved area or the buffer zone,” the court said. While the court did not say anything specifically on the issue of the trunk road, experts say the automatic implication of the judgement is that all the tourist traffic on the road should be banned.