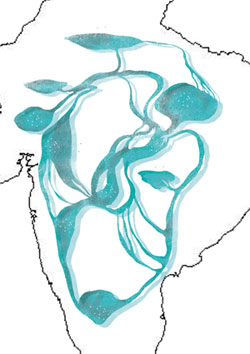 The apex court of India has given the go ahead for the controversial inter-linking river project, seeking to transfer water from surplus to water deficit areas in the country. In its final judgement dated February 27, 2012, a three-member bench, headed by the chief justice of India, expressed the “pious hope of speedy implementation” to bring the project to a success. The project, in the pipeline since 1980, has been touted by the Centre as one solution to a number of problems: making water available for irrigating 35 million hectares; enabling full use of existing irrigation projects; generating power to the tune of 34,000 MW with added benefits, including flood control.

It has been repeatedly emphasised in the court over the past decade that the cost is negligible when compared to the potential benefits. But this is hard sell considering there is no true estimate of the project cost. Earlier this year, the apex court had said that it would not favour interlinking of rivers if it causes huge a financial burden on the Centre. A decade ago the cost of the project was estimated at 5,60,000 crore; the true cost can known only when the detailed project reports of the 30 river link projects are drawn up, of which currently one—Ken-Betwa—has been completed.

The court's latest and final judgement on the matter mandates the formation of a committee to “take firm steps and fix a definite time line to lay down the guidelines for completion of feasibility reports or other reports” and “ensure the completion of projects so that the benefits accrue within reasonable time and cost”. The committee, with representation from various government departments, and nominated civil society representatives, must meet at least once in two months, says the order (see box). All existing reports are to be placed before the committee, which is ordered to take note of the suggestions in the reports and to take decisions as to how the same are to be implemented. The committee is mandated to submit a bi-annual report to the Cabinet of the government of India, placing before it the status and progress reports. The Cabinet will then be expected to expedite the matter within thirty days from the date the matters are first placed before it for consideration.

The interlinking of rivers can be traced back to the plans of British engineer Sir Arthur Cotton who sought to link the Ganga and the Cauvery. At the time, the idea was to improve connectivity for navigation purposes, but with the expansion of the rail roads, the idea was shelved. The idea of inter-basin transfers (from surplus to deficit regions) has been mooted off and on over the past century. But it was not until 1980 that the project gathered steam, when the Ministry of Irrigation formulated a national perspective plan for optimum utilisation of the country's water resources. In 1982, the National Water Development Agency (NWDA) was formed as an autonomous body entrusted with the task to carry out the water balance and feasibility studies of the river linking program. The work was divided into two components: Peninsular and Himalayan river development, with 16 and 14 link schemes respectively (see maps).

The apex court has stated that “a greater element of mutuality and consensus needs to be built between the States and the Centre on the one hand, and the States inter-se on the other. It will be very difficult for the courts to undertake such an exercise within the limited scope of its power of judicial review and even on the basis of a Public Interest Litigation (PIL)”. A PIL, as per the judgment, has to fall within the contours of constitutional law and can hardly take unto itself tasks of making a policy decision. “Such an attempt may amount to the court sitting in judgment over the opinions of the experts, without any tools and expertise at its disposal, ” states the judgment.

The judgement goes on to say: “We see no reason why any state should lag behind in contributing its bit to bring the Inter-Linking River Program to a success, thus saving the people living in drought-prone zones from hunger and people living in flood-prone areas from the destruction caused by floods”.

The project has not received consent of all states. It is argued that if not for the writ petition and judicial intervention, river linking projects would not presently be under consideration. “It is not the mandate of the Supreme Court to tell the Government which project to take up or expedite”, says Himanshu Thakker, convener of South Asia Network for Dams, Rivers and People (SANDRP), a non-profit and member of a court appointed committee representing civil society to look in to the matter. There are certain procedures for taking up projects such as formulating feasibility reports, detailed project reports and environmental impact assessment. “Mandating that the project be expedited, is in violation of these existing legal procedures,” says Thakker.

The Ken-Betwa river link, for instance, is the only project for which the detailed project report has been prepared, following a tripartite memorandum of understanding signed in 2005 between the Union minister for water resources and the chief ministers of Uttar Pradesh and Madhya Pradesh. The environmental clearance, however, to transfer excess water from Ken to Betwa through a 231 km canal, has been categorically denied by the Ministry of Environment and Forests. Approximately 8,650 ha of forestland in Madhya Pradesh is likely to be submerged for the project; part of the forestland is a part of the Panna National Park. Yet the Supreme Court in its judgement mandated that this be taken up on a priority basis. “We would direct the Committee to take up this project for implementation at the first instance itself,” reads the judgement. This is a case of judicial overreach, says Thakker.

The genesis of the case lies in another case adopted suo moto by the Supreme Court. While hearing this case, a reference was made to a speech made by the then president A P J Abdul Kalam who, among other things, called for a network of rivers to deal with floods and droughts. The Supreme Court directed that this be taken up as an independent writ petition. A notice was issued in 2002 to all the states as respondents in the case. None of the states, barring Tamil Nadu, filed an affidavit, supporting or opposing the project. The time was extended but no further affidavits were received. This was taken as in-principle consensus amongst all states to go ahead with the project.

Rahul Gandhi has been quoted as being vehemently against the idea of large-scale inter-basin transfers. For his stand, he has drawn flak from DMK leaders of Tamil Nadu who are all for it—no major river originates in the state; it is dependent on inter-state rivers. The states of Assam, Sikkim and Kerala have protested on the grounds that they should have the exclusive right to use their water resources and that such transfers should not affect any rights of these states. Due to reluctance of certain states, the Centre has not been allowed to undertake detailed surveys.

The apex court formed a task force in 2002, which set an action plan for all detailed project reports to be completed by 2006, and projects to be implemented by 2016. This is not done till today and no project has reached the implementation stage. “The projects can only be completed if states give their consent or if there is a Constitutional amendment, water being a state subject,” says Mohan Katarki, Supreme Court advocate. “It is doubtful that either of these will happen for the execution of the proposed link projects, although some links may come through, eventually,” he adds.

For more information on the river linking project, read articles posted on the India Environment Portal.