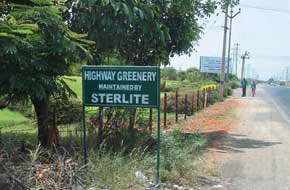 Three days after the Sterlite Industries, a subsidiary of mining and metals giant Vedanta, was asked to close its copper smelting plant in Tuticorin by the Tamil Nadu Pollution Control Board (TNPCB), the Supreme Court has imposed a penalty of Rs 100 crore on the company for polluting the environment. The TNPCB order followed a gas leak from the plant premises on March 23. The apex court order was in connection with a public interest petition on which the Madras High Court had ordered closure of the plant more than two years ago.

The apex court while imposing the fine refused to uphold closure of the plant ordered by the high court. The penalty amount will have to be paid in five years, the court said. While imposing the fine, Justice A K Patnaik said the compensation must act as a deterrent and that any amount less than Rs 100 crore would not have the desired impact.

Vedanta company officials were not available for comments. The company has, meanwhile, approached the National Green Tribunal (NGT), challenging TNPCB's closure order, stating that the closure notice was issued in haste. Sterlite submitted before NGT on Monday that the company was meeting more than 55 per cent of copper requirement of the country and employed 1,000 permanent workers and about 3,500 contractual labourers, and indirectly ensures livelihood of 15,000 persons. Sterlite has stated that people would lose jobs if the company shuts down.

Plant's poor track record
The 400,000 tonne capacity plant of Sterlite Industries, considered the cheapest copper smelter in the world, has been at the centre of controversy in Tamil Nadu since it commenced operations. The unspecified gas leak on March 23 had triggered public protests. Later, on Saturday, Tuticorin collector Ashish Kumar ordered officials to inspect the premises of the plant.

Gas leaks from the Sterlite's copper unit are not new. But the March 23 leak affected a large number of residents. According to Kumar, many residents complained of sneezing, suffocation and burning sensation in their eyes. Kumar said TNPCB observed that the emission from the unit exceeded the norms prescribed by the pollution board. Meanwhile, the district revenue department officials examined the phosphorus and sulphuric acid chambers of the plants, following which the state electricity board was instructed to cut the power supply on March 30. The plant's closure was greeted with celebrations by residents.

Earlier, in 1997, two workers were affected by a similar gas leak and residents had complained of suffocation.

The Madras High Court had ordered closure of the plant in September, 2010 on a public interest petition by Gopalaswamy Vaiko, a leader of regional political outfit, MDMK. The petition stated that not just the local fisher folk but the whole town has been affected by the copper smelting plant. Taking cognisance of the hardships faced by Tuticorin residents, the high court ordered closure of the plant. Sterlite Industries approached the Supreme Court and managed to get a stay on the high court order. The petitioners had then moved court against the stay.

In May 2012, the Supreme Court directed the Central Pollution Control Board and TNPCB to investigate compliance of emission control and effluent treatment measures at the plant. In August 2012, the report by the TNPCB showed that high amounts of gypsum was discharged from the Tuticorin unit which was far above the prescribed norm. The report also mentions that a request by Sterlite Industries for formal consent from the TNPCB to operate its unit was rejected by the authority earlier. Documents with the Union Ministry of Environment and Forests throw more light on the violations committed by Sterlite. The depositions recorded by the Corporate Accountability Desk of MoEF during a civil society public hearing on EIA-related issues in Delhi in November 2005 show that Sterlite Industries was operating without valid consent to operate.

The deposition records show that on October 10, 2003, a public hearing was held for the expansion of the copper smelter capacity, post facto, after much of the construction of new facilities were in an advanced state of completion. Sterlite Industries organised the public hearing for only a few of the newly added components and entire sections, such as the oxygen plant, the power plant and the continuous cathode rod plant, which were neither declared nor included as part of the Environment Impact Assessment in the public hearing. Environmental clearance was given for the expanded capacity on September 22, 2004. The deposition records show that the fully constructed facility does not have Consent to Establish under the Air and Water Acts.