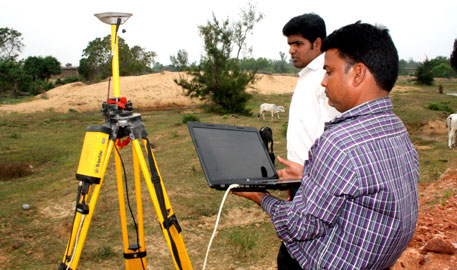 After a three-month long stand off, the Odisha government on Thursday started survey work to build a boundary wall around the proposed POSCO steel plant in Gadakujang gram panchayat of Jagatsinghpur district.

Three months ago, many village residents who have been resisting takeover of their land for the South Korean steel giant, prevented contractors and workers of the private company from digging trench for the construction of boundary wall. But on Thursday, the survey work was not opposed by anyone in Gadakujang, said Jagatsinghpur district collector S K Mallick.

“The survey work using global positioning system (GPS) was started on Thursday in the presence of officials and police. We will draw the exact boundary of the project through GPS,” said Mallick.

Villagers and local non-profits are opposing the construction of the wall for a host of reasons, including the fact that the boundary will result in the cutting of many trees.

Sishir Kumar Mohapatra, general secretary of POSCO Pratirodhaka Sangram Samiti (PPSS), said the survey work was started without informing anyone. “The National Green Tribunal had stopped tree felling six months ago. The final hearing will be held soon in New Delhi which has prompted the state government to hurriedly build the wall before the final order. We hope it will deliver a judgement in favour of residents. Two earlier committees, Saxena committee and Meena Gupta committee, had observed that the state government has violated rules for the steel plant,” he added.

The POSCO steel project in Odisha is infamous for several illegalities to date, said  Prafulla Samantray, president of Lok shakti Abhijan and a member of National Alliance of People’ s Movement. These include—tree-felling, grabbing forest-dwellers' land, incomplete assessment and deliberate concealment of facts, seizing natural resources without requisite clearances, criminally beating, arresting and killing those resisting the project, and violating fundamental rights to life and liberty of local citizens. “Now the Central and state governments have connived with POSCO by modifying rules to continually extend its in-principle approval as multi-product SEZ and violating the requirement that there will be no forcible acquisition of land for SEZs,” said Samantray.

Even United Action Committee (UAC), a pro-POSCO group, has said it will oppose the decision to construct the boundary wall. Nirvaya Samantray, UAC secretary said: “The authorities have betrayed us by not fulfilling our six demands. After the construction of the boundary wall, the government will not listen to our demands.”

The six-point charter of demands of UAC include measurement of betel vines from stay to stay instead of fence to fence; raising the compensation for betel vine workers from 20 to 30 per cent of the amount being paid to the vine owners;  jobs for the 3,000 families in Dhinkia, Nuagaon and Gadkujang panchayats that will be affected by the plant; higher price for agricultural and homestead land; giving contract work to local contractors during construction and paying compensation to the beneficiaries who had demolished their betel vines after the 2008 survey.

The district administration on July 4 sanctioned 1,092 hectares of land in the Dhinkia, Nuagaon and Gadakujang gram panchayats for the eight million tonne per annum steel plant.