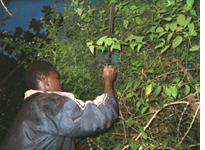 Invasion of alien vegetation is troubling the Swaziland government. In the second week of June, the government doled out Real 10 million (us $1.4 million) in its annual budget to combat proliferation of invasive species, particularly the triffid weed (Chromolaena odorata), which is also called sandanezwe in the Swazi language.

Given the ferociousness of the weed, conservationists say the amount might not be sufficient to address the problem.

Triffid weed, a fast-growing perennial shrub, is actually native to South and Central Americas. But it has been thriving in the climate of this southern African country for over a decade now. This small-leafed vine forms dense strands and spreads at an aggressive rate, smothering indigenous vegetation.

"No one knows how it came to spread but it is everywhere.It crowds out other plants and takes over land that might be cultivable," Moses Ngwenya, a conservationist working in the northern Hhohho region, told irin news service. The largest government farm in the district of Hhohho, meant for grazing cattle, is almost overgrown by these invasive plants. This has put farmers in a trouble, as animals do not find triffid weed edible; it has no nutritional value either. Around 80 per cent of the country's population depends on farming and livestock business.

In 2005, the government declared proliferation of these invasive alien species a national calamity, but failed to take up sufficient efforts to eradicate it. This year, following the dry spell in all four of Swaziland's regions, food production has gone down to emergency levels. And "any further threat to agriculture is a double whammy now," said Ngwenya.

"Uncontrollable spread of these weeds in the country is a serious concern because they are now a threat to the country's biodiversity and socio-economic development," said prime minister Themba Dlamini, while delivering a cabinet report on the impact of invasive species on the country's environment and economy to a Senate select committee. "The problem with the weed is that even if you clear one area, you have to keep the momentum up by going back again after an interval and do more clearing. It can only be terminated by pulling it up by its roots, and burning the entire plant," Noah Nkambule, the agriculture ministry's principal secretary, told the select committee.

If left unchecked, these invasive plants could colonise 90 per cent of the grazing areas within the next few years, the government believes.