For Australia, 2013 is indelibly marked in its memory for the heat records it set. This year, too, with Sydney witnessing the driest first half of the year and driest June in the decade, it is time the government acknowledges the climate risks it faces. This is a wake-up call for climate-smart policy and planning.

While the Australian government has been accused of significantly watering down its official advice on extreme weather after removing mention of links between climate change and events such as bushfires and heat waves, June 2014 is set to be the city’s third warmest in 155 years of records, based on the average of minimum and maximum temperatures.

The document on the website of Department of Environment, Australia, explained and provided information on how climate change is influencing dangerous weather. But it has now removed the statements that explicitly link climate change with extreme events like heat waves

Previous version : “There is a growing and robust body of evidence that climate change will increase the frequency and intensity of extreme weather events.

The Edited Version : The frequency and intensity of extreme weather events is “changing” and that “some studies” show a link to climate change, but stresses that it is “difficult to isolate the role of climate change in any given event”.

June 2014 is now recorded as Sydney’s driest June in a decade with 68 mm of rain which is just 50 per cent of the long-run average of 132.4 mm. The city has also seen the driest first half of the year in a decade, according to Brett Dutschke, senior Australian meteorologist. 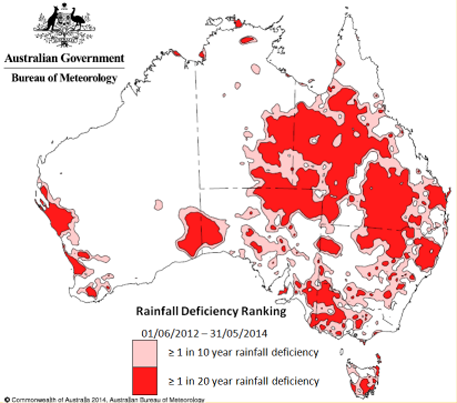 June was also marked by two “warmwaves” – stretches of at least three days in a row of maximums in the warmest 10 per cent of records for that date – following up a record-smashing 14-day heatwave set by Sydney in May, according to the University of NSW's Scorcher website, which tracks heatwaves anywhere in Australia in real time and is updated daily. It is an initiative of Sarah Perkins at the Australian Research Council's Centre of Excellence for Climate System Science at the University of NSW, and is designed to help the community better understand current and earlier heatwaves.

What are the reasons for the unusually warm and dry June 2014?

With the National Water Account Summary  released by The Bureau of Meteorology showing that total water use increased by 35 per cent in 2012-13 compared to the previous 2011-12, the warmer periods ought to be considered by the Australian government while planning for future.

The IPCC assessment, released in March 2014  has a word of caution for the continent nation. It has stated there is a “medium to high confidence” that extreme weather events are “projected to increase in many locations” in Australia (see box).

Driven by rising temperatures and reduced cool season rainfall, there is a need for effective integrated responses encompassing management of supply, recycling, water conservation and increased efficiency across all states and territories as already stated by latest IPCC report on climate change.

Natural climatic variability is very high in the region, especially for rainfall and over Australia, with the El Nino-Southern Oscillation (ENSO) being the most important driver. According to a news report in Reuters, the Australian Bureau of Meteorology  indicates that El Nino is likely to develop by spring 2014.

Isn’t now the right time for Australia to start a climate-smart sustainability plan?