Pesticides consumption in India is less than 1 kg/ha as against 4.5 kg/ha in USA and 11 kg/ha in Japan; Parliament panel recommends price control of pesticides 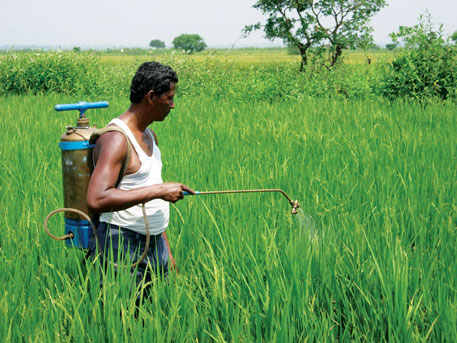 The facts were revealed in the report, “Production and Availability of Pesticides”, submitted to Parliament by the Parliamentary Standing Committee on Chemicals and Fertilisers, headed by Gopinath Munde. The report was submitted in Rajya Sabha on Thursday and in Lok Sabha on Wednesday. The report said that pesticides consumption in India is less than 1 kg/ha as against 4.5 kg/ha in USA and 11 kg/ha in Japan.

The parliamentary committee comprising over two-dozen members of Parliament (MPs) has also asked the government to start regulating pesticide prices in the country. The committee in its report to Parliament has observed that the government has no mechanism to regulate the prices of pesticides and the same are determined by market forces of demand and supply.

“India being a agricultural country, the endeavour of the Government should be to supply the farmers with good quality of pesticides at reasonable price and, therefore, the determination of prices of pesticides cannot always be left to the market forces of demand and supply,” the report states. The MPs said that there is a need for a system whereby effective supervision is maintained and the price of pesticides is reviewed by the Department of Chemicals and Petrochemicals from time to time. Pesticide production in India is a deregulated sector at present.

At present there are only 230 registered pesticides in India, while it’s more than 1,000 in the US and for the EU, it is around 700. Out of these, 66 pesticides are banned in India but are exported.

When asked about this, the Department of Agriculture and Cooperation had told the Parliament committee that export of pesticides depend on agro-climatic conditions. For example, nicotine sulphate, which is banned in India for domestic consumption, is used in Japan. Then, there are aldicarb and maleric hydrazide which are banned in India but are permitted in USA. So, these are individual items which have to be considered separately. The department said it is reviewing that list and is continuously revising this list.

The ministry of chemicals told the parliamentary panel cited a media report (published by Agriculture Today) to justify pesticide production: “Every year in India, pests and diseases eat away, on an average, 20-30% of food, worth about Rs 45,000 crore, produced by the farmers. World over, the damage by fungi to rice, wheat and maize alone costs $60 billion per year and the fungal diseases destroy 125 million tones of rice, wheat, maize, potatoes and soyabeans each year. Stemming fungal diseases alone in the world’s five most important crops could feed more than 600 million people. It is, therefore, essential to control the pests and diseases through Primary Plant Protection for providing sufficient food security to the growing population of the country.”