Worldwide increase in temperatures is becoming a major cause for concern 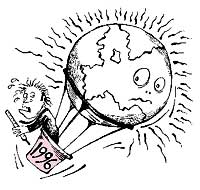 the phenomenon of global warming is surely not confirmed as yet. An area may have become warmer not because of an increase in global warming but because of certain natural variations. But whatever be the cause, it is time we took note.

For Earth as a whole, 1996 ranked among the 10 warmest years, according to worldwide records of air temperatures on Earth's surface kept since the mid-19th century. American and British scientists, who pointed this out, also said that it was not quite as warm as the peak annual temperature recorded in 1995. The January '97 report issued by the National Aeronautics and Space Administration's Goddard Institute for Space Studies in New York ranked 1996 as the fifth-warmest ever. A second report by the British Meteorological Office and the University of East Anglia, Cambridge, uk, placed it eighth on the basis of preliminary data.

The satellite data, which gives better global coverage but reflects temperatures throughout the atmosphere rather than at the surface, generally parallel the surface readings. On balance, however, balloons showed a lesser temperature than the satellites record: when influences on climate like volcanic eruptions and occasional warming of Pacific waters caused by El Nino are filtered out, said Christy, the satellite data reveals a warming rate.

New York served up some big regional surprises in 1996, even as this decade's familiar string of warm years continued globally. At the regional level, record precipitation soaked northeastern us and the Pacific northwest, making the year the seventh wettest in more than a century, despite a drought in the southwest. Not only Americans, but also Canadians and Europeans affirm that large expanses of their continents were chilly for a large part of the year, reversing a three decade pattern of warming. Despite the drop, scientists say that the 1990s remain the warmest decade on record, with the 1980s following as the second.

While experts on climate are still far from arriving at a complete understanding of the world's weather, they believe they can account for some of last year's changes. They say, for instance, that the cooling of North America and Europe was caused by natural shifts in atmospheric circulation that dictate the largescale movement of hot and cold air.

Many scientists agree that the rise over the last two decades is too small to be significant, especially since there are many gaps in the surface data, said Richard S Lindzen, an atmospheric scientist at the Massachusetts Institute of Technology.

The surface records show that the Earth has warmed by about one degree Fahrenheit (-17.2c) in the last century and that the warming has accelerated in the last two decades. Climatologists say the warming has probably been caused, at least in part, by emissions of heat-trapping waste industrial gases like carbon dioxide, and estimate that the surface will warm by another 3.5 degrees over the next century if emissions are not reduced. By comparison, the world is five to nine degrees warmer now than during the last Ice Age.