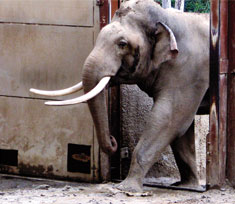 Google came under fire at the recently concluded international wildlife meet in Bangkok. Conservation groups accused the Internet giant of helping fuel a dramatic surge in ivory demand in Asia that is killing African elephants at record levels. Leading the charge against Google at the Convention on International Trade in Endangered Species meet, held in the first week of March, NGO Environmental Investigation Agency claimed there are 10,000 ads on Google Japan’s shopping site that promote ivory sale.

About 80 per cent of the ads are for “hanko”, wooden stamps used in Japan to affix signature seals to official documents. The stamps are inlaid with ivory lettering. Google said in an emailed response: “Ads for products obtained from endangered or threatened species are not allowed on Google. As soon as we detect ads that violate our advertising policies, we remove them.” But the NGO said it had written to Go ogle chief executive, Larry Page, on February 22, urging the giant to remove the ads because they violate Google’s own policies.