Trivalent chromium, widely used in tanning industry, and thought to be harmless found to be the culprit 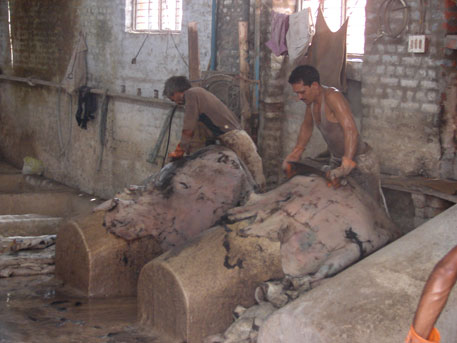 Thousands of workers in the country’s 2,500 tanneries may be at risk. Chromium III, or trivalent chromium, widely used in the tanning industry, was till now thought to be relatively harmless. But a new study has challenged this belief. It has found that this form of chromium can damage DNA.

Chromium is an element that occurs naturally in rocks, animals, plants, soil, volcanic dust and gases.  The most common forms of the element are chromium (0), chromium (III) and chromium (VI). Trivalent chromium is the form that occurs naturally, and is also needed by the human body. The other two forms are generally produced by industrial processes. Chromium sulphate, the tanning agent of choice, releases trivalent chromium during the tanning process.

For the study led by Sudhir Kumar from molecular and human genetics laboratory at the University of Lucknow, researchers took blood samples of 200 male participants. Half of the participants were tannery workers from Kanpur and the rest were selected randomly and had no exposure to chromium.

The team then checked the samples for possible DNA damage. They observed that blood cells of people not exposed to chromium had an intact nucleus while the cells of the tannery workers had a “comet”-shaped nucleus.

Moreover, the levels of MDA (malondialdehyde) were found to be significantly higher in the workers compared to other people. Higher concentration of MDA indicates increased rate of oxidative stress in exposed populations. Oxidative stress results when the body produces more reactive oxygen species (ROS) than it can tackle. Too many ROS can damage cell structures.

“This is the first reported study on tannery workers from north India, related to the adverse effects of trivalent chromium, in terms of genetic damage and oxidative stress,” say the authors in the paper. The study was published online on August 29 in Toxicology and Industrial Health.

Excess of everything is bad

“Professional exposure to trivalent chromium increases the risk of dermatitis, ulcers and perforation of the nasal septum and respiratory illnesses as well as increased lung and nasal cancers,” Haider says.
Rakesh Jaiswal, environment campaigner and co-ordinator of the non-profit, Ecofriends, in Kanpur, says in the early 1990’s there were about 170 tanneries in the city. “Over the years, the industry has flourished and now there are more than 300 tanneries,” he says.

Jaiswal adds that adequate precautions are not taken by tanneries to protect workers from exposure. “It is possible drinking water inside tanneries is also contaminated with chromium,” he says.

DNA damage could be a precursor to serious diseases like cancer. So does the finding mean that trivalent chromium is carcinogenic?  “If chromium causes DNA damage, it still might not be a carcinogen,” says John B Vincent, professor of bioinorganic chemistry and biochemistry at the University of Alabama in Tuscaloosa in the US. “It depends on whether the body can repair the DNA damage properly or not,” he adds.

Vincent, who has himself studied the toxic effects of chromium, says the study is interesting and should be followed up. He suggests researchers should now “look at whether the route of exposure (direct contact with skin, oral, inhalation) effects the degree of genotoxicity and oxidative stress from chromium exposure.”
For most people in the know, hexavalent chromium was the one to be wary of. It is a known carcinogen and causes a range of health problems. Long-term low exposure through inhalation can cause lung cancer. If liquid containing hexavalent chromium comes in contact with skin, it can cause allergic contact dermatitis.