As the Tatas try to counter public opposition to their prawn farm, the environment ministry looks on passively. 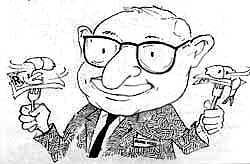 ORISSA chief minister Biju Patnaik wants to disturb the placid waters of the famous Chilika lake but faces an angry response from his people. A broad-based people's agitation is building up in the state against the Patnaik government's efforts to allow the Tatas to set up a prawn aquaculture farm in Chilika, the largest brackish-water lake in Asia.

The reaction has forced the key promoter of Chilika Aquatic Farms Limited, Russi Mody of the Tatas, to begin a high-profile campaign. Armed with a report from the public-sector Water and Power Consultancy Services (India) Limited (WAPCOS), he is arguing the joint-sector project, in collaboration with the Orissa government, will bring economic benefits to the state, the country and, of course, the local fisherfolk. However, the report has already been devalued by Union minister for environment and forests Kamal Nath, who said in July that WAPCOS did not have the necessary expertise.

However, Mody conceded at a Calcutta news conference that the agitation against the Chilika project has assumed all-India proportions. He had received letters from all over the country and even some Tata directors expressed misgivings over the project.

Former state finance minister Banka Behary Das is actively involved in the movement to save the Chilika lake. He recently organised a series of conferences across the state that culminated in a state-level meeting. Even Biju Patnaik's minister for public grievances, Prasanna Patapani, sent a message of support to the state-level convention, which demanded with one voice that the project be given up.

The Chilika Bachao Andolan, started by a group of Orissa students under the leadership of Chittaranjan Sarangi, has organised a padayatra in the villages along the Chilika lake. Earlier this year, several thousand people had occupied the site of the Tata prawn farm and demolished a structure built by them. The protest was forcibly stopped by the police and several students and fisherfolk were arrested. In late October, the Communist Party of India (Marxist), which has a strong base in some of the villages along the lake, organised a demonstration against the government in Bhubaneswar.

While people have been protesting, the Union ministry of environment has been dragging its feet. The independent consultant that Kamal Nath had promised a delegation of Orissa members of parliament in July has not yet been appointed.