Technology interventions that save water

It was early June. Jaspal Ram of Lehra Turkot in district Bathinda of Punjab was busy in his field putting gunny bags filled with mud on a plank of wood trailing his tractor. After sometime, he adds another row of gunny bags to add weight. On being asked what he was doing, Jaspal replies, “I’m levelling my field. A lot of water is lost if the paddy fields are not levelled properly or have uneven surface. This technique helps to save 20 to 25 per cent of irrigation water.” He grows paddy, wheat and sometimes potato. 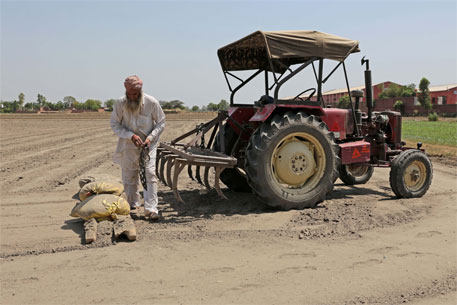 It was early June. Jaspal Ram of Lehra Turkot in district Bathinda of Punjab was busy in his field putting gunny bags filled with mud on a plank of wood trailing his tractor. After sometime, he adds another row of gunny bags to add weight. On being asked what he was doing, Jaspal replies, “I’m levelling my field. A lot of water is lost if the paddy fields are not levelled properly or have uneven surface. This technique helps to save 20 to 25 per cent of irrigation water.” He grows paddy, wheat and sometimes potato.

Jaspal explains how levelling helps to save water. When the land surface is uneven, it leads to water drainage and does not allow water to stagnate. Paddy cultivation requires stagnant water. Since uneven surface leads to water drainage, farmers keep adding more water in order to maintain the water level. However, if soil surface is even, water is retained and 25-30 per cent water is saved. Besides, unevenness of the soil surface impacts germination and yield of crops.

Just a few metres away, there is another field where four tractors have been employed for the same work—land levelling. But here all tractors are attached with laser levellers. Laser land levelling helps achieve the desired degree of sloping and uses a guided laser beam.

Jaspal says that since he could not afford a laser leveller he has used a  local version of it. “It’s very useful and I have been practising it for over five years now,” he adds. He acknowledges that traditional methods of levelling land are cumbersome and time-consuming, but he doesn’t have money to invest. It costs around Rs 600 to 1,000 per hour.

Technologies like laser leveller have played a very supportive role for the Sub-soil Water Preservation Act, a law which prohibits nursery sowing and paddy transplantation before a stipulated time in Punjab and Haryana. The law has been formulated to arrest water decline in both the states by the respective state governments. Studies have shown that if 105 million cubic metre of water is saved on 4,000 hectares every year, it would save 12.5 million units of electricity valued at Rs 5 crore.

S S Yadav, deputy director of agriculture in Kurukshetra, Haryana, says, “There are lot of technology interventions, but the ones which played a major role in saving water are laser levellers, under-ground pipelines, sprinklers, drip irrigation and direct seed sowing. The government is giving subsidy for it and also renting out the machines and equipment.

An agricultural officer from Bathinda on condition of anonymity says the state government has provided a lot of help to the farmers to embrace the technology. Special agriculture machinery centres have been set up. A laser leveller with tractor can be hired for Rs 425 for an hour, while without tractor farmers can rent it for just Rs 150. Similarly, equipments like scrappers, chisellers and trolleys with tractor are available for Rs 350 and trencher for Rs 600. He adds, “Technology reduces drudgery and eases work. Thus it benefits farmers with less resources too.”

Punjab agriculture commissioner, B S Sidhu, says subsidies are also available on irrigation equipment which reduces water loss. “Farmers generally bring water to their fields through open channels that lead to a lot of evaporation and hence water loss. We are trying to replace them with underground water pipelines, drip irrigation as they reduce the water loss through evaporation to a significant extent.” There is 75 per cent subsidy available on micro-irrigation systems out of which 50 per cent is given by the Centre, 25 per cent by the state government and the rest is borne by the farmer.

Yadav adds, “Even the earlier practice of planting in the nursery first and then transplanting is being changed to direct seed sowing. This saves 10-15 per cent of water along with labour and energy. These small technology interventions have helped farmers a lot. It has not only made their work easy, but has also reduced the effort being put in as these are less labour intensive. Farmers are also saving money with small investments in these technology interventions.”

No benefit to small farmers
Seventy-three-year-old Karnail Singh, an old farmer from Bathinda, acknowledges that technology intervention has reduced a lot of labour work. “We would spend 15-16 hours in fields working when I was young; today, it's just a matter of hours,” he says. He has a farm of 10 acres (4.04 hectares) and has all the new agriculture machinery. “It’s an investment which really pays off,” he says, adding that the small and marginal farmers who don’t have resources really suffer. Even these government agri-machinery centres most of the times do favours to those associated with politicians and common farmers suffer a lot.