Ironically, the upgrade involves a technology that is being discarded worldwide due to its poor safety record and complicated processes 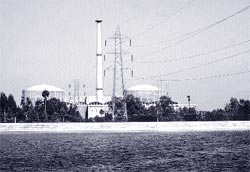 On September 2, India embarked on the next stage of its nuclear programme. The Union cabinet cleared the Department of Atomic Energy's (dae) proposal for the Rs 3,500-crore, 500-megawatt (mw) prototype of the fast-breeder nuclear power reactor (fbpr) at Kalpakkam in Tamil Nadu. Ironically, the upgrade involves a technology that is being discarded worldwide due to its poor safety record and complicated processes.

Though the fbr venture has raised the hackles of experts and activists alike, it continues to be a dream project of the Indian nuclear establishment. In fact, scientists at the Kalpakkam-based Indira Gandhi Centre for Atomic Research (igcar) have been pressing for the adoption of the technology for about three decades. The institute's director, S B Bhoje, claims that fbrs are no more risky than conventional nuclear reactors. Columnist Praful Bidwai, however, voices his concern. "I am astonished to see that igcar scientists, who could not even run a test fbr smoothly, are seeking to scale up operations to such an extent," he remarks.

It may be noted that so far the dae has tested an fbr with a capacity of just 13 mw. Work at the test reactor began in 1985, about 13 years after construction began. Since then technical hitches have reduced its power generating capacity by one-fourth. The prototype will be built along the lines of this plant.

The need for an alternative appears to have stemmed from the country's fast-depleting stocks of uranium and widespread public protests against any fresh moves to extract the resource (see: "Critical masses", September 15, 2003). The fbpr marks the first definitive step towards the commercial exploitation of thorium as a nuclear fuel. While second-generation nuclear reactors will use a fuel comprising plutonium (30 per cent) and natural uranium (70 per cent), thorium will replace the latter in plants that are set up in the third phase. India's thorium deposits are about six times those of uranium and constitute the world's second largest reservoir of the radioactive material.

The catch is that an accident is far more probable in an fbr. Worse still, it would be much deadlier than one in a conventional water-cooled nuclear reactor. This is because the plutonium-natural uranium blend used to run an fbr is an extremely fissile fuel. The chain reaction in this type of a unit is caused and sustained by fast, highly energetic neutrons that are not "moderated", as they would be in a conventional reactor based on "thermal neutrons". It generates intense heat, which is removed by the coolant -- typically, a molten metal such as sodium. The reactor is called a "breeder" since it produces more fissile material than it consumes.

Not only does sodium react violently upon coming into contact with water, it also burns on combining with air. In the process, the reactor becomes prone to explosions. The use of sodium as a coolant has been the major cause for accidents in fbrs across the globe. The most frequently cited example is that of the European conglomerate-run Superphenix fbr in France.

The 1,250-mw reactor, costing about us $6 billion, was meant to establish breeder technology commercially. The project was abandoned in the wake of several accidents relating to sodium leakage. Bhoje admits that the sodium aspect is the biggest snag in the fbr technology. At the same time, he maintains that India has developed adequate safety mechanisms to address the problem.

Local people and anti-nuclear activists have been opposing the fbr project, fearing damage to their fragile coastal ecology and in view of its grave health implications. Two years ago, environmental groups launched a campaign demanding that the project be scrapped. The track record of the Kalpakkam complex (it was recently in the news over a radioactive leakage incident) is also responsible for the public outcry.

Fast-breeder reactors generally cost 50-100 per cent more to build than normal versions, and at least twice as much to run. M P Parameswaran, a scientist formerly with the Bhabha Atomic Research Centre (barc) in Trombay, opines: " fbrs are being promoted because the government is keen to produce more weapons-grade plutonium." Bhoje counters: "It is all people's imagination. If weapons-grade plutonium has to be made, there are cheaper ways of doing it. Nobody uses fbrs for this."