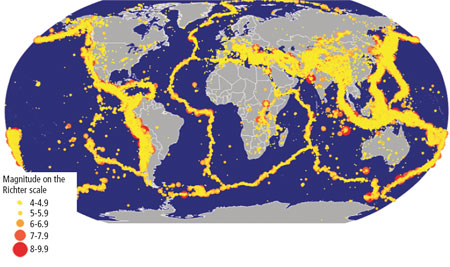 THOUSANDS were killed and millions affected when a 7.2 earthquake struck Haiti early this year.

It flattened much of the capital, Port-au-Prince. Seismologist Christopher Scholz has warned that a major earthquake does not mean the future risk is lower; it’s higher.

Scholz, who works with Lamont- Doherty Earth Observatory in USA, said major earthquakes can trigger quakes at nearby faults. When a fault ruptures in a major quake, the movement releases energy built up over thousands of years and transfers some of it to faults within 50 km. For the second fault to rupture it must be at its breaking point, said Scholz. Every active fault follows its own seismic cycle and with successive ruptures, their seismic cycles lock phases. Such synchrony is called phase locking or entrainment.

Scholz is not the first to observe entrainment. It was first observed and coined by physicist Christian Huygens in 1666 when he saw two pendulum clocks with different oscillatory patterns swinging in rhythm as they were placed together. Scholz first found the evidence of phase-locked faults in California’s Mojave Desert. In the 1990s, a series of quakes jolted the desert. The 7.3 magnitude Landers earthquake at the Camp Rock fault struck in 1992.

It was followed by the 7.1 Hector Mine quake in 1999 at the Pisgah fault, some 24 km away. This, in turn, ruptured other minor faults. A volley of quakes measuring between 5.2 and 6.1 on the Richter scale had preceded Landers and was believed to have triggered it. Scholz said the Landers quake transferred a small amount of stress to the Pisgah fault, causing the Hector quake.

The Camp Rock and Pisgah faults have seen bursts of seismic activity separated by several thousands of years even in the past, noted Scholz in the Bulletin of Seismological Society of America in June. Susan Hough of the US Geological Survey said, one can dissect and understand triggered earthquakes. But the occurrence of one quake tells us very little about when and where future large earthquakes will happen, she added.