The big challenges for Telangana 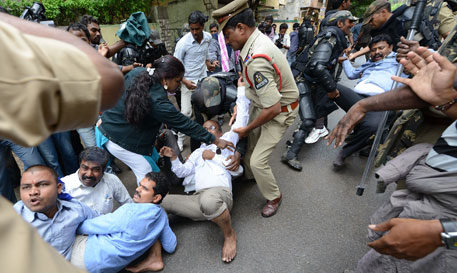 The Congress-led United Progressive Alliance (UPA) ruling at the Centre is expected to take a final call on the demand for a separate Telangana state at the meeting of its coordination committee on Tuesday. The meeting will be followed by a discussion in the Congress Working Committtee, the policy making body of the Congress, after which a formal declaration is expected.

The Congress party in Andhra Pradesh is opposing the move to carve out Telangana from the state, but the top leadership of the party in Delhi has almost agreed to bifurcate the state during its core group meeting last week. With the main opposition party, Bharatiya Janata Party, extending its support, the formation of Telangana state now seems inevitable. However, if formed, the new state will have to face huge challenges in terms of managing its natural resources and fulfilling its energy requirements.

Water: the most contentious of all disputes

Telangana region accounts for huge chunk of natural resources of the current Andhra Pradesh. For instance, the 10 districts in this region account for 45 per cent of Andhra’s forest cover. The region comprises 68 per cent of the catchment area of the Krishna river and 79 per cent catchment area of Godavari river. Utilising these resources for the development of the region will be a big challenge for the state. Most crucial among these will be making water available to the drought-prone districts of the region.
When Andhra Pradesh is divided, the existing disputes over the Krishna and Godavari waters between Telangana and other regions will become even more serious.

Those who wanted a separate state had persistently pointed out that this was against the international guidelines of sharing waters. Their argument was that had Telangana been a separate state, the claim of Telangana would have been not less than 548 TMC. But what it got was 277.86 TMC—just half of its rightful share. The advocates of Telangana had pointed out that the region was deprived of even the allotted quantity of water by the state government.

As for the Godavari waters, the Godavari Waters Disputes Tribunal in 1975 awarded 1,480 TMC to Andhra Pradesh. Within the state, 79 per cent of the river catchment area is in Telangana while 21 per cent is in coastal Andhra. According to the advocates of Telangana state, going by the catchment area, Telangana region should get 1,169 TMC of water, when it becomes a separate state.

However, there is a catch. Even if the new state gets the share of water as per its demands, lack of irrigation facilities will become a big constraint in reaping the benefits.

Irrigation is a highly sensitive and political issue in Andhra Pradesh. Except for Sriramsagar project and Sri Arthur Cotton Barrage, there are no other major constructions across the Godavari in Andhra Pradesh. Till 2004, the state utilised only 700 TMC of water. However, In 2005, to address the woes of farmers, mainly in the perennially-parched Telangana and Rayalaseema regions, the then chief minister Y S Rajasekhara Reddy initiated the “Jalayagnam”—a Rs 186,000 crore ambitious irrigation programme comprising 86 irrigation projects.

Among these projects, Indirasagar Polavaram Project is proposed in West Godavari district in coastal Andhra while many other mega projects such as Pranahita-Chevella, Dummugudem, Yellampally, Kanthalapally are in Telangana. But considering the huge cost and quantity of power required, completing these projects will be a huge challenge before the new state.

Since the Godavari is flowing three to four metre below the land level in Telangana, all projects under construction are lift irrigation schemes requiring huge quantity of power. The Pranahita project alone will require 3,466 MW power, almost one-third of the current total installed power generation capacity of  Andhra Pradesh—16,300 MW.

The cost of Pranahita project cost is Rs 40,000 crore according to 2011-12 estimates. The project is to be completed in 2018. The Andhra Pradesh government has already spent Rs 3,000 croe on this project. Now the responsibility of completing the project will be the headache of the new government. The cost of Kanthalapally project in Warangal district is estimated at R 23,000 crore. It needs 1,000 MW power. The cost of Devadulla project in Khammam district is estimated at Rs 10,000 crore. The Andhra Pradesh government has spent Rs 6,500 crore on this project. 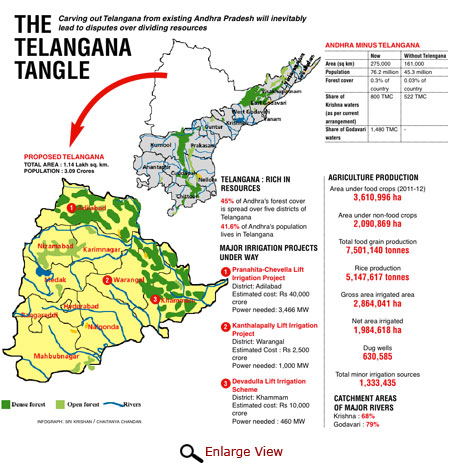 Since 2005, the Andhra Pradesh government has already spent Rs 30,000 crore on irrigation projects. The annual allocation for irrigation has been around Rs 15,000 crore for the last three fiscals. Fulfilling the irrigation dreams is going to be a real headache for the new state.  It will not be in a position to either abandon or take forward the projects.

While the issue of irrigation can well be a big challenge for the new state once it is formed, the immediate bone of contention between the Coastal Andhra, Rayalseena and Telangana is the division of Hyderabad. “Hyderabad accounts for 70-72 per cent of the state’s revenue. The status of Hyderabad will decide how the revenue is shared between the two states. This is going to be crucial for the development and roadmap for both Andhra and Telangana. The correct picture of the true challenges will emerge then,” says eminent economist and former Planning Commission member C H Hanumantha Rao.

A B K Prasad, senior journalist who has worked as editor of many Telugu newspapers and former chairperson of Official Language Commission had a different perspective. He described the demand for a separate Telengana state as “games played by unemployed politicians trying to gain power and position”.

If Telangana is separated, it's going to be a real noose around the neck of the Central government, he said.  Vidarbha, Gorkhaland, Bodoland are in queue with their demands for separate statehood. Tribal areas in Andhra Pradesh have demanded a separate state with Bhadrachalam as the capital, he pointed out.

Exploring the demand for new states