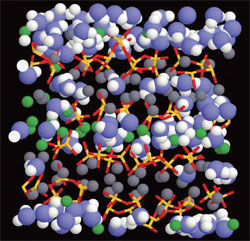 THE WORD cement draws from the Latin term opus caementicum. Romans had coined it for a material made of crushed rocks and limestone. They used it to build their grand cities. Their architecture stood the test of time. So did the binder without which buildings would fall apart and roads would crumble. About 80 per cent of cement is made and used in emerging economies. But making it also means adding to an already polluted environment. When limestone is burnt in kilns to extract the ingredient calcium, carbon is added to the atmosphere. Cement plants account for five per cent of global CO2 emissions. Hence a basic understanding of cement is essential, said Sidney Yip. He is a professor of nuclear engineering with the Massachusetts Institute of Technology (MIT), USA. He and his colleagues decoded the three-dimensional structure of cement mixed with water or calcium silicate hydrate (C-S-H). This research, they said, gives a starting point to improve cement’s strength and durability. It might also open avenues to replace its raw materials with environmentally safe ones. Unable to decode it so far, scientists have compared hydrated cement’s structure with naturally occurring crystalline C-S-H—tobermorite. It is a rare mineral with architectural uses. The tobermorite molecule has horizontal layers of silica triangles interspersed with layers of calcium oxide. The similarity between a tobermorite and a hydrated cement molecule ends here. In cement every third, sixth or ninth triangle was turned up or down along the horizontal plane to reach the layer of calcium oxide above or below. These checkpoints, in an otherwise undisturbed geometry, acted as convenient lodging sites for water molecules. These disturbances in cement’s structure makes it a hybrid between crystals like sodium chloride and amorphous glass. Like most crystals, cement is hard and brittle and it does not crack like glass under pressure. Since tobermorite has the checkpoints missing, its structure weakens as a hydrate. The same water makes cement robust. “We’ve known for years that at the nano-scale, cement hydrates pack together tightly like oranges in a grocer’s pyramid. We’ve finally been able to look inside the orange to find its fundamental signature,” said Franz-Josef Ulm, environmental engineer from MIT, and co-author of the paper published in the September issue of Proceedings of the National Academy of Sciences.