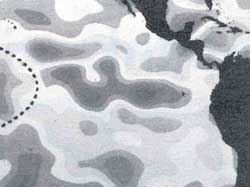 TILL recently, weather watchers knew of only I weather-monster - the El Nino. The Child Christ is a demon that disrupts the Pacific ocean, triggering droughts and floods over large and farflung areas of the planet. But new clues reveal that El Nino is not alone. There are similar but lesser fiends that rule the Indian and Atlantic Oceans (New Scientist, Vol 146, No 1977).

Like El Nino, the new phenomena have also been linked to the pattern of rainfall over parts of the surrounding continents. Meteorologists in Britain and Australia are already using temperature variations - which trigger these demons - to predict rainfall in Australia and Brazil.

The new phenomena operate in the manner of El Nino, but their impact is less. When the El Nino whirls into action, a warm pool surrounding eastern Indonesia undergoes a wintery phase, reducing the difference in temperature between the pool and central Pacific towards South America. This weakens the trade winds, unleashing a flood of warmer water eastwards across the Pacific, bringing in its wake tropical storms. These changes cause widespread nuisance including drought in eastern Australia and floods in Peru.

One of the newcomers, called the Indian Ocean dipole, was first noticed in the early '80s by meteorologists investigating the connection between surface temperatures in the Indian Ocean and rainfall across Australia's deserts. Scientists took a decade to decipher its nature.

The dipole is a twin system of a warmer than average band of water between northern Australia and Java and an unusually cold band of water running northwest into the Indian Ocean from Australia's west coast.

The other newcomer operates from the tropical Atlantic. Chris Folland and colleagues at the British Meteorological Office's Hadley Centre for Climate Prediction and Research in Berkshire have been monitoring changes in sea- surface temperatures in this region.

They can now use these data to predict the amount of rainfall in northeast Brazil during the rainy season. But here El Nino's influence must be reckoned before venturing any predictions. Folland says that tropical Atlantic blows hot and cold between January and May. When the sea in the Southern tropics becomes warmer than usual and water to the north of the equator cools, it rains cats and dogs in northeast Brazil. When the pattern is reversed, the season is drier. The links between these temperature vicissitudes and rainfall are still tenuous. To get better handle on El Nino's cousins, scientists will be current looking at them more closely under a 15-year study of climate's capricious nature. Unlike the TOGA experiment, which was set up chiefly to tease out the connections between the atmosphere and the Pacific current, the new experiment will train its guns on the 2 new members of the climate underworld.