The drying pens of calligraphy

As digital calligraphy becomes popular, traditional calligraphy artists who write by hand are facing diminishing prospects for their livelihood 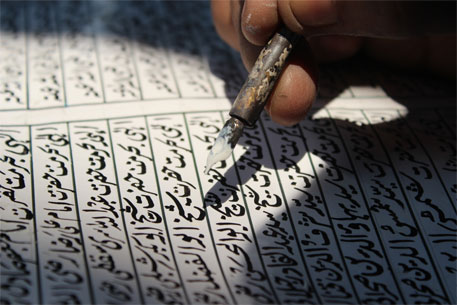 Abdul Rahman lives in fear of losing his job every day. The 62-year-old katib or traditional calligrapher from Old Delhi’s Urdu Bazaar now finds himself competing with computerised calligraphy fonts, a development that threatens to wipe out the traditional occupation of his entire community.

This state of near joblessness has forced several katibs to replace their shops with those selling food items, digitally printed books and readymade garments. But Rahman refuses to quit.

In his 8x8 foot room in a lane of Urdu Bazaar, Rahman talks about calligraphy and his connection with the art. “It took me a very long time to learn this art and to give it away just like that would be like driving a stake through my heart,” he says. “With digitalisation of calligraphy fonts, the lives of many like me have been collapsing like a house of cards.”

Rahman can write Urdu, Arabic and Persian in calligraphy. “I usually write names of offices and departments required to make stamps. I also make calendars for madrasas, but it barely fetches me any money to get through even a day.”

Remuneration for artists like Rahman hasn’t increased significantly from the Rs 5,000 they earned in the past. Typically, they earn up to Rs 3 per word, while commercial artists charge up to Rs 5 per letter. 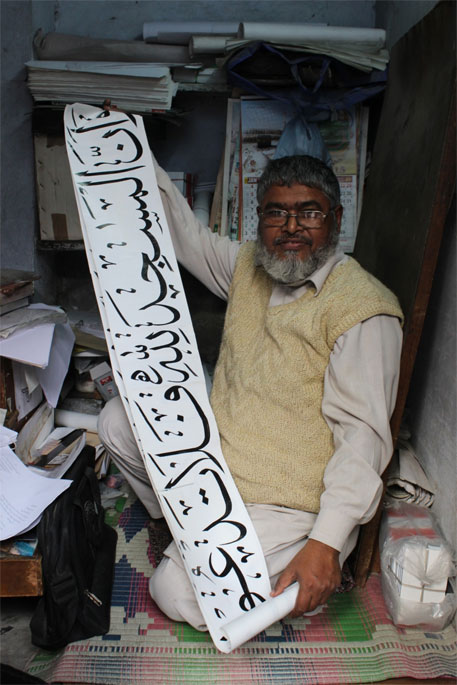 A short walking distance away is the shop of 70-year-old Mohammad Tehsin. Tehsin is frustrated with how the tide has turned against these artists. “There was a time when I would not even get the time to eat my lunch because of the work load. I remember sitting at my bench and working till 2 am in the night. Those were my golden days,” he says.

Tehsin is from Muzaffarnagar. He started working as a calligrapher in Delhi’s Urdu Bazaar in 1968. “All sorts of people like politicians and film stars would come to me to get written scripts made because before the computer was invented, people appreciated the beauty of this art form,” he says. He doesn’t think computers can play around with the fonts like he can.

Calligraphy is the art of giving form to signs in an expressive, harmonious, and skillful manner. First practised by Sumerians, calligraphy became very popular in Asia. Here, it evolved into a new alphabet, with more details and basic sounds.

Calligraphy was first seen on a wide scale in ancient India during Asoka’s reign. He was the first Indian emperor to promote his dynasty through carved stones and pillars. Over history, Indian calligraphy artists have worked with a wide range of materials such as clay coins, stone, metal, cloth, leaves and paper. Exquisitely styled ink-pots are a special feature of Indian calligraphy.

Renowned Bollywood lyricist and script writer, Javed Akhtar, explains why calligraphy by hand must be protected. “Calligraphy takes a word and writes it in a way that’s visual, which to begin with, was extremely utility-oriented but become an art itself,” he says. “Do we really need this art? But then do we need beauty? Of course we do. Calligraphy enriches our lives.” 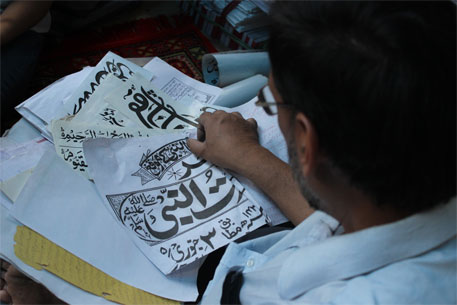 85-year-old Rasheed Chowdhary, owner of India Art Studio in Urdu Bazaar, has been a calligrapher since partition. He says there are only two ways left for traditional calligraphers to go. “They could either give up on this art form and start using computers if they want to do well financially, or continue to do what they do and ultimately bleed out on the thorns of life.”

Calligraphy in a new avatar

Traditional calligraphy may have ceased to be a profitable venture for artists from Urdu Bazaar, but the style has found favour with international tattoo artists who are using technology to make intricate calligraphy-based tattoos for their clients.

Ankit, a tattoo artist at Devil’z Tattooz in the upmarket GK-1 area of South Delhi, tells Down To Earth, “We have several customers who get written scripts tattooed because they hold a meaning. Calligraphy fonts are particularly in demand when making such tattoos.”

Harish Chandra, a commercial artist from Munirka in South Delhi is attempting to revive the art of calligraphy by hand. He started a company called Calligraphy India in 1995 to teach all those interested in learning the art.

Chandra says traditional calligraphers need to come together to protect their profession. “It’s not like there is a dearth of calligraphers in India, but unfortunately there is no interaction within this community. There is a need to bring them together under one umbrella through societies or associations,” he says.