The evolution of the food Bill

The Bill, originally drafted by the National Advisory Council, saw several changes and got diluted over the past three years

In 2009 when Congress-led United Progressive Alliance (UPA) came to power for a second term, it had a key agenda—a legislation to ensure food security. Work on this legislation formally started in 2010. On July 14, 2010, the National Advisory Council (NAC) that functions under the leadership of UPA chairperson Sonia Gandhi constituted a working group to draft the National Food Security Bill. After deliberations and consultations, NAC finalised the details of the basic framework of the proposed National Food Security Bill (NFSB) at its meeting held on October 23, 2010.

After drafting the basic framework, NAC placed it in the public domain for comments; and based on the feedback it received, NAC finalised NFSB on June 22, 2011. The government made some amendments to the NAC draft and introduced it in Lok Sabha on December 22, 2011; the Bill's aim was to address the problem of food security in a comprehensive manner. 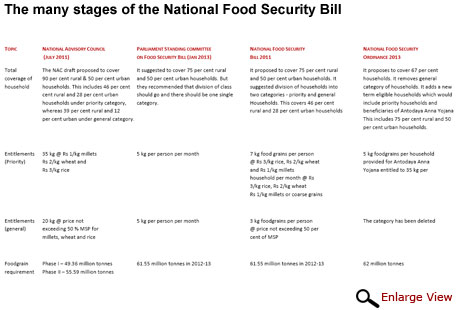 With the introduction of Bill, the proposed legislation was sent to the Parliament standing committee on food and civil supplies, which deliberated on the legislation for over a year and finally submitted a report to Parliament in January this year. After this, the government introduced a new draft of NFSB in July because state governments opposed the 2011 draft vociferously. Since the government was finding it tough to pass the legislation it issued an ordinance.

The table shows the Bill's journey over the past three years.

Report of the expert committee on national food security bill

Food subsidy and its utilisation - report of the Standing Committee