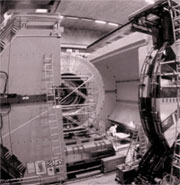 an exotic heavy particle may have made its first appearance at a particle accelerator in Hamburg in Germany. Scientists say that this could mark the birth of an entirely new physics. If the so-called 'leptoquark' exists, it implies that a previously unknown force is at work, one that may lead towards the unified theory of all nature's forces.

The finding from desy, the German Electron Synchrotron, could represent a curious union between quarks and leptons, the two families of fundamental particles which make up all matter. Alternatively, they could mean that quarks and leptons are not basic building blocks after all, but are made up of even smaller particles."If these results turn out to be true, this discovery would be on par with the discovery of the electron or dna ," says Robin Marshall of the University of Manchester, uk , who was involved in the work. "It would be the most breathtaking physics of my career."

The findings are the result of zeus and h 1, two experiments that have been running at desy over the past four years. Physicists have been monitoring high-speed collisions between anti-electrons or positrons, from the lepton family of particles, and protons, which are made of quarks. Detectors pick up the showers of particle debris thrown out when a positron hits either a quark in a proton or one of the 'gluons' that bind the quarks together.

Existing theories about the four known forces in nature - gravity, electromagnetism and the strong and weak nuclear forces - predict how the particle debris should emerge from the collisions. Physicists would expect an occasional head-on collision from which a positron and a quark recoil at sharp angles with enormous energy. "The events are spectacular," says Roger Cashmore of the University of Oxford, uk, a member of the zeus team.

The desy teams expected just one of the most violent collisions to occur during two of their four-year experiments. Instead, they have seen around four in each. One explanation for this frequency, they say, is that a positron teamed up with with a quark inside the proton to form a leptoquark before spitting out a high-energy positron as it decayed. "The leptoquark is a bizarre object that we don't understand completely," says Marshall. Because none of the four known forces in nature - would be capable of holding together a lepton and a quark, a new force must be at work.

The existence of a fifth force would revolutionise physics. Such a force would be welcomed by physicists searching for grand unified theories that can explain how all the forces in nature acted as one just after the birth of the universe. Some unification theories rely on the existence of a mysterious force that could have glued together quarks and leptons in the fireball of the big bang.

Other explanations are possible, say the researchers. A positron could briefly have stuck to a gluon without a proton to create a 'leptogluon', implying that a new force was at work. Alternatively, quarks or electrons may have some kind of substructure, such as families of still smaller particles inside them. Cashmore says the violent scattering might suggest that positrons are occasionally striking one of these smaller particles inside a quark, and bouncing back sharply.

Another less likely theory is the appearance of a particle from the 'supersymmetric' world. Supersymmetric theories suggest that every particle in nature has a partner in a mirror world. If they exist, these mirror images would also help to unify nature's forces. The prime suspect in the desy experiments would be the supersymmetric partner of the top quark, according to theorist Joe Lykken of Fermilab, near Chicago. "But it would be unlikely to decay back into a quark and positron," he adds.

Researchers fear that the whole effect may turn out to be a mirage. Although the chances of everyday physics explaining these violent collisions are tiny - about 1.4 per cent - it is possible that it has dealt this improbable hand. The uncertainty may vanish by the next year. zeus and h 1 experiments have started and researchers expect to double the amount of data they have gathered by the end of the year.