The fizz has gone 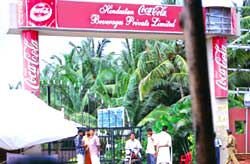 Coca-Cola has received yet another drubbing in India, this time in the recent Kerala panchayat elections. In a resounding victory for the campaign to hold the soft-drink major accountable for environmental degradation, constituents voted in favour of the incumbent Perumatty panchayat in the state's Palakkad district. One of Coca-Cola's largest bottling plants is located in Plachimada in Perumatty, and in 2003, the village's panchayat had ordered it shut, accusing the soft drink major of causing severe water shortages and pollution (See 'Calling the shots', Down To Earth, December 31, 2003).

Perumatty panchayat president, A Krishnan, representing Janata Dal (Secular), was re-elected, and the Left Democratic Front, of which Krishnan's party is a constituent, won 15 of the 17 wards in the panchayat. "Coca-Cola was a major issue in the campaign," said K Krishnankutty, secretary general of the Janata Dal (Secular). "All their [Coca-Cola's] promises of providing jobs to local people did not have any impact," said R Ajayan, convener of the Plachimada Solidarity Committee, the community based group leading the campaign against the soft drink major.

The Perumatty panchayat elections were closely watched. Says C R Bijoy of the People Union for Civil Liberties, "The results are a sure indicator of the people's discontent at the handover of natural resources to corporates".