The halo is hotter than the star

An astrophysicist tries to explain why, in violation of the laws of thermodynamics, the corona is hotter than the Sun. 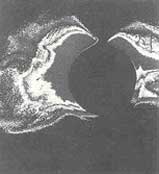 HEAT ALWAYS flows from a hotter body to a cooler one, according to the second law of thermodynamics. But then why is the Sun's atmosphere hotter, by several million degrees, than its surface where all the energy is generated? Astrophysicist Jack Scudder has furnished an ingenious mechanism to explain how the transfer of heat takes place without violating thermodynamics (Nature, Vol 361, No 6414).

The problem first arose when it was realised that the atmosphere of the Sun, seen during solar eclipses, should, like the Earth's atmosphere, be very thin owing to its enormous gravity.

This observation could be explained only if it assumed that the Sun's atmosphere was extremely hot. But scientists could not understand how the corona was so much hotter than the Sun.

Attempting to explain this anomaly, Scudder says the Sun's gravity acts like a velocity filter causing slow-moving ions (charged particles) to be trapped near the surface. Only ions moving at high velocities can overcome the Sun's gravity to reach the corona. In doing so the fast moving highly energetic ions do lose some of their energy, but still retain a large part of it when they reach the corona. The relatively highly concentration of such highly energetic ions in the corona makes it 200 times hotter than the surface below.

Scudder's work has important implications because he asserts such a mechanism is at work not just in the Sun, but in all similar stars at a certain stage of their life.