NASA discovers the largest ever ozone hole over Antarctica. A wake up call for industrialised countries to reduce greenhouse gas emissions 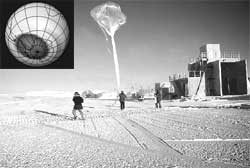 it is time to take out sun creams, ultraviolet protective sunglasses, wide brimmed hats and clothing with long sleeves because the largest ever ozone hole over Antarctica has just been detected by the us National Aeronautics and Space Administration ( nasa) .

The ozone hole over the Antarctic is the biggest since scientists began measuring the seasonal phenomenon 15 years ago -- it now measures 28.3 million sq km. The previous record size was seen two years ago, when the hole extended over 27.2 million sq km. The World Meteorological Organisation ( wmo ) has said that the "near total destruction" of the ozone in some layers of the stratosphere had been observed since the middle of September, much earlier than in previous years.

For more than a decade, the hole appeared in late August or early September, with the phenomenon peaking in the first or second week of October, a clear sign that greenhouse gases ( ghg ) are eating away the Earth's protective layer. An ozone hole over the South Pole is a regular phenomenon, but in the past five years, scientists have also begun to witness a similar event over the North Pole.

B Bregman of the Institute for Marine and Atmospheric Research, Utrecht, the Netherlands, says: "All these changes can lead within decades to the formation of a ozone hole above the Northern Hemisphere comparable with the one above the South Pole." "The discovery must pressure the need to cut larger and early ghg . The current trends in the atmosphere may lead to a 15-20 year extra delay of the ozone layer recovery," he adds.

"Even though the geographical size of the ozone hole was the largest on record and the ozone depleted earlier than ever, the severity of the ozone depletion within the hole reached about the same levels as the past few years," said David Hofmann, director of National Oceanic Atmospheric Administration's ( noaa' s) Climate Monitoring and Diagnostics Laboratory. On the other hand, satellite measurements indicate that the depth of the Antarctic ozone hole during the last 10 days of September was the greatest on record, says the wmo .

"The most important parameter is how deep the ozone hole is, how much has been lost. This year it is the deepest ever seen. There is a large area with more than 50 per cent depletion," says Michael Proffitt, senior scientific officer with wmo . The ozone hole over Antarctica this year garnered a few firsts -- it appeared earlier and spread over a larger area than ever. And for the first time in its 15-year existence it is threatening the health of thousands of residents of southern South America.

On October 5, health officials in Punta Arenas, Chile, have warned residents not to go in the sun when it's highest in the sky. Residents of Ushuaia, Argentina, are also at risk from extremely low levels of ozone that are letting harmful ultraviolet radiation leak through to the Earth's surface. Health authorities called an orange alert -- the second most dangerous level in a scale of four -- in which ultraviolet exposure can cause skin burns in seven minutes. A red alert indicates a stage where burns can occur in five minutes.

Experts say that industrialised nations of must now be more proactive in the climate change negotiations and quickly implement strict measures to reduce ghg emissions if the ozone layer has to be recovered.