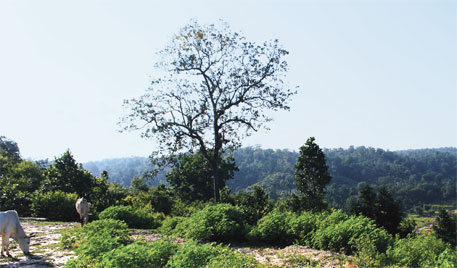 In what seems to be a repeat of the “go and no-go forests” formula, the Union Ministry of Environment and Forests (MoEF) has issued a report on parameters for identifying inviolate forest areas. These are supposed to be pristine forests where any commercial activity would lead to irreversible damage and hence they need to be protected. The report, made public on January 24, is open for comments till February 23.

A group of ministers constituted by the Cabinet secretariat in September 2011 had asked MoEF to identify inviolate forests. The group was set up to look into matters relating to mining and other development projects. Almost a year later, MoEF formed a 16-member committee under its secretary to formulate the parameters. It has representatives of the National Biodiversity Authority, Forest Survey of India, Wildlife Institute of India, National Tiger Conservation Authority, MoEF and principal chief conservators of forests from some states.

“The immediate distinction is that between inviolate and probably violate,” pinpoints a forest official at MoEF. The committee has indicated six parameters, including forest type, biological richness, wildlife value, forest cover, landscape integrity and hydrological value. All the parameters will be scored on a scale of 0-100. The country will be divided into grids of size 1 km by 1 km. “Each grid will then be scored on these parameters and an average of the six scores will be taken,” explains the official. Grids with average score above 70 will be considered inviolate, he adds. The methodology has not yet been made public.

The committee has scored 178 forest types, one of the parameters, based on comparative ecological significance, extent and uniqueness. To illustrate, Andamans’ moist deciduous forest, and Cachar’s tropical evergreen forest score more than 90, while Siwalik’s chir pine forest and Assam’s sub-tropical pine forest score less than 20.

Scoring criteria for wildlife value means exclusive breeding sites and habitats of rare and endangered species will get a score of 95, while areas with occasional wildlife presence will get 25. Landscape scores will be based on satellite imagery and maps. For example, an area located at or near the centre of a unfragmented landscape having more than 1,000 sq km will get 100. To maintain the hydrological cycle, the committee has given importance to forests. Any area located in the catchment of water supply schemes will be scored 75 while area not in any catchment of a perennial or major seasonal river will get 40.

Irrespective of the parameters, some areas have been exclusively declared inviolate. These include: all grids falling under protected areas and within their one kilometre radius; forests in direct catchment of a perennial river feeding a water supply scheme or a dam; and area within 250 metres of a river bank.

Having an inviolate grid does not guarantee that forestland will be protected. And the forest official confirms this: “If a mining block contains 20 grids and 15 of them are violate then even if the rest five belong to the inviolate category, the block will be considered violate.”

Ashish Fernandes of Greenpeace says, “It seems like a deliberate exercise to make sure that most forest patches do not fall in the inviolate category, especially those where coal is.” The weightage given to the six parameters is arbitrary as is the minimum score of 70 to qualify as an inviolate grid, he adds.

Let us consider the Mahan coal block in Madhya Pradesh’s Sidhi district which was recently granted forest clearance. Initially, the block’s clearance was stalled over concerns that it had dense forests. As per the six parameters, the block, which belongs to Essar and Hindalco, would get a score of 73.3 classifying it as inviolate (see ‘Mahan coal block: violate or not?’). If a grid-wise analysis is done for the block these figures could change substantially on either side of the 70 mark, depending on the score of each grid. Also, the forest type in the area has been stated differently in different reports which may further change the scoring. “Such a methodology will render the entire exercise futile,” says Fernandes. 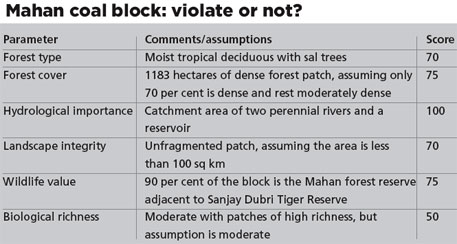 Pointing to the timing of the report’s release, he says, “The fact that the ministry has been sitting on the report since July last year and chose to release it right when the PMO is putting pressure to dilute procedures related to forest clearance is questionable.” Kanchi Kohli, an activist who has been working on forests does not agree with the methodology. “If some areas are recognised as inviolate and the adjoining areas are opened for mining, it is likely these designated no-go zones for mining will be negotiated for ancillary infrastructure, power or industry. There is no embargo on that,” she says. This criterion is expert-driven and overrides any other value that forests have especially when it comes to cultural connects and livelihood, she adds.

Madhu Sarin of NGO Campaign for Survival and Dignity in Punjab says the committee has missed the vital concept of forest rights and people’s consent. “This report essentially assumes that if the parameters are not met adequately then the forest may be diverted. It lacks the connectivity one should have drawn with the Forest Rights Act (FRA),” she says, adding, “This is especially relevant when a committee under PMO has suggested the consent of the gram sabha for forestland diversion as mandated under the law is not needed if the state certifies that FRA has been complied with.” The demarcation of protected areas has been a rather arbitrary exercise in the country, then what meaning does this methodology hold, she asks.

After having completed the first step of forming the 16-member committee, MoEF will now constitute another committee. This committe will identify areas as per the six parameters and submit its list to MoEF. The ministry will put out this list in the public domain for comments from different stakeholders, including state governments. MoEF will then finalise the list and notify them under the Environment (Protection) Act of 1986.