The JNU way out 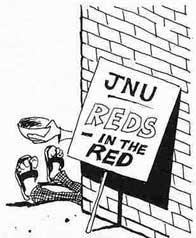 The dons of Jawaharlal Nehru University (JNU) have devised a way to get around cuts imposed by the University Grants Commission's in fund allocations that threaten teaching and research programmes in several of the country's universities and colleges. After six months of negotiations, senior economics professors at JNU struck a deal with the Export-Import Bank for a Rs 50 lakh grant to build an economics library equipped with ultra modern facilities for documentation and information retrieval. JNU thus becomes the first centrally funded university in the country to raise private resources to counter budgetary cuts.

Actively involved in the fund-raising project was Deepak Nayar, a senior faculty member, who resigned as chief economic adviser to the Union government protesting the Centre's programme of liberalisation and privatisation was proceeding too fast and without control.

"The mindless cut in education grants made it impossible for our library to make purchases and pay subscriptions," he says. "The only option then, was to tap private funds for a library, which will not only help preserve the minimum standards, but also act as a model of excellence."