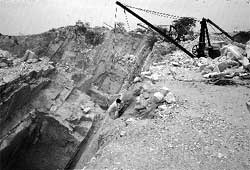 mineral-rich Rajasthan is paying the price for its wealth. Open cast mining in Bijolia area in the state has scarred the earth, killed vegetation and shortened the lifespan of workers.

About 25 per cent of the workers suffer from silicosis, bronchitis, asthma or tuberculosis (tb) and 50 per cent from malaria, which has spread as a result of mosquitoes breeding in the open pits. What is more, noise levels touch 96-125 decibels -- way above the permissible limit of 75 decibels -- causing stress and affecting the mental health of workers.

The extent of the damage to the ecosystem is revealed by satellite imagery. The Bijolia area, which includes Bundi, Chittorgarh and Bhilwara districts in Rajasthan and Mandsaur district of Madhya Pradesh, has 30 centres where sandstone is mined, spread over 617 sq km. An assessment of the area reported by M L Jhanwar (Journal of Remote Sensing , Vol 24, No 4) indicates that over a period of 20 years (1971-1991), nearly 20 times the area leased for mining has been affected. While the area covered by mining activity increased by 35 times, forest cover decreased by 46 per cent, the area under dense forests by 90 per cent and land under agriculture by 12 per cent. Wastelands increased by 46 per cent and the water level have also been affected.

"Mining is a major activity in Rajasthan," says S M Mohnot, executive director of Marhdhar Vigyan Sansthan, a Jodhpur-based non-governmental organisation (ngo) which has recently taken up projects relating to the effects of mining on the environment and human health. "Destruction of the evironment is only going to increase," predicts Mohnot.

Sandstone excavation involves large-scale removal of rocks which are dumped at other sites, which, in turn, wastes more land. "The contractors dig, plunder and leave, to start afresh at another place," says K D Joshi, senior hydrologist at the Central Arid Zone Research Institute, Jodhpur. A hydrological survey indicates that the course of the stream near Baino-ka-talaab has changed as a result of mining. The water level in wells in the area has dropped by 2-3 metres. According to a 1990 Central Ground Water Board report the water level fell by as much as 5 metres between 1987 and 1989 in some areas. The workers are mostly marginal farmers who have been forced to seek employment in mines. They have to go to their villages to plough the land. While some manage to commute back and forth, more often than not, the land is taken over by someone else. "These mines are not conducive for anything. The environment, the welfare and the health of the workers all suffer," says Mohnot.

Dust from mining activity has increased suspended particulate matter from 411 microgrammes to 467 microgrammes per cubic metre, more than double the amount found in areas unaffected by mines. Nearly 75 (25 per cent) of the 300 people interviewed had silicosis, tb , bronchitis and asthma. These respiratory problems shorten the life spans of workers -- they are invalid or dead by the time they are 40.

The state government has turned a blind eye to these problems. "The mining lobby in Rajasthan is so strong that the state government returned funds that were given to it by the Union ministry of environment and forests for conservation measures," alleges B B Bhandari, emeritus professor of botany at J V Narain University, Jodhpur.