The Panipat tragedy: what went wrong? 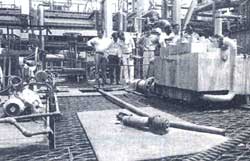 IT WAS a routine job of replacing the defective safety valve of the spare ammonia feed pump at the 15-year-old urea plant of the National Fertilisers Limited (NFL) at Panipat. Around 11.00 am on August 26, eight employees climbed the steps to the open-air ramp, which had been declared a "safe area" by the plant safety department, and began to replace the valve when the unthinkable happened. The bush of the suction valve that stops the gas flow from the mainline, gave way. Liquid ammonia burst out at the high pressure of 23 kg per sq cm, vapourising within seconds to form suffocating clouds of deadly gas. This hit and choked to death eleven persons and injured ten even as their colleagues sprung into action to diffuse the gas with water sprays.

Describing the nightmarish experience, Raj Kumar, a senior mechanical opoerator, said, "The initial splash of the liquid ammonia hit Lal Singh, our assistant shift engineer, directly in front of me. Instinctively, I turned the other way, took a deep breath, closed my eyes and began groping my way down the flight of stairs." Coughing and choking, with his lungs bursting, he scrambled for fresh air.
What went wrong? The plant, which produces 1,550 tonnes of urea daily, has won many awards, as recorded in the glossy brochure dished out to journalists by the company. S Narayanan, technical director, said this was the first major incident in any of the NFL plants. Officials repeated they had been following all safety precautions and that the leak was a freak "accident." However, from all accounts, there seems to have been some laxity on personal protective precautions that workers are expected to take when working on the ammonia pipelines. The use of gas masks could have prevented the extreme exposure to the highly-concentrated ammonia. Raj Kumar admitted to Down To Earth that for such "routine" maintenance jobs, "We usually do not wear protective gear." Narayanan told reporters that the area had been declared safe and passes had been issued to permit work in the area.

R D Sohal, senior public relations officer of the plant, explained, "Jobs with class 2 safety permits, as was the case here, are carried out in the open and hence the workers are not required to wear gas masks." According to officials, the permit is issued when the concerned pump is isolated -- both the inlet and outlet valves on the ammonia gas pipeline are closed and the pressure pump is emptied.

Narayanan said they would consider relocating the control room, which responded to the accident, farther away from its present site near where the disaster occurred. According to reports, even though the control room personnel were informed within seconds, they took some time to coordinate a response because they had also been affected by the leak.

Among the dead were casual labourers working nearby whose deaths were certainly avoidable. "We need to take extra precautions to ensure that workers other than those doing the hazardous task, are not present in the vicinity," he said. Other experts also point out that the work on the valve was sanctioned when there was obviously a large quantity of ammonia in the pipeline.

A highpowered committee, headed by Paul Pothen, a former chairman of IFFCO and KRIBHCO, the two leading fertilser cooperatives, has been set up to inquire into the accident and to "fix responsibility if it was due to any human failure," says S N Jain, chairman and managing director.

But just 36 hours after the accident, the plant had begun work again. Clearly, many questions about the disaster remain. Panipat may have opened up a can of worms about the lack of safety regulators, and even more importantly, preventive maintenance Indian industry continues to suffer.